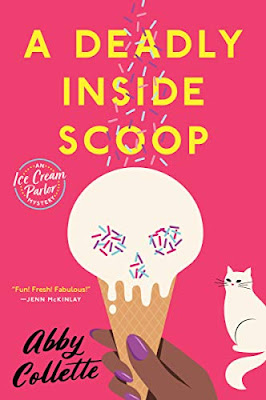 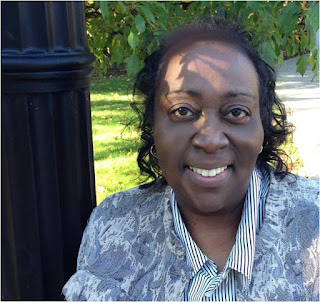 Posted by Catherine @ Book Club Librarian at 12:00 AM 3 comments:

Today I'm featuring A Deadly Inside Scoop by Abby Collette. The excerpts shared are from an advanced readers copy I received from the publisher for a blog tour. Today is the book's publication day (May 12, 2020).

Book Beginning:  Chapter One
Today I was going to touch the stars.
Lying on my back, I stated up at my bedroom ceiling.  When I'd moved to my own place the only things I'd taken from my childhood home were the star-shaped glittered cardboard cutouts my grandmother and I had made when I was seven.  I hung them as a reminder of what she'd told me--always shoot for the stars.

Teaser:  "Well, don't volunteer any information.  It's easy to get railroaded when it comes to murder investigations."

What do you think?  Would you continued reading?
A Deadly Inside Scoop is the first book in the new Ice Cream Parlor Mystery cozy series.  Set in the Cleveland, Ohio suburb of Chagrin Falls, the story centers on Win Crewse, who is determined to restore her family's ice cream parlor to its former glory.  With her recent MBA degree and goal to reach for the stars, Win is on course to achieve success--until she stumbles upon a dead body in the snow at the base of the Falls. When the discovery threatens not only the family business but her family itself, Win must take on the role of amateur sleuth to protect everything her family holds dear.

This is a delightfully delicious new series, complete with a cast of ethnically and age-diverse characters, humorous scenes, and mouthwatering ice cream flavors (recipes included).

See my full review and enter a giveaway here.

This First Chapter ~ First Paragraph and Teaser Tuesday post was originally composed and/or compiled and published by Catherine for the blog, bookclublibrarian.com.  It cannot be republished without attribution.