Today I'm featuring a recent read, With Love from London by Sarah Jio. The excerpts shared are from an eBook borrowed from the library. 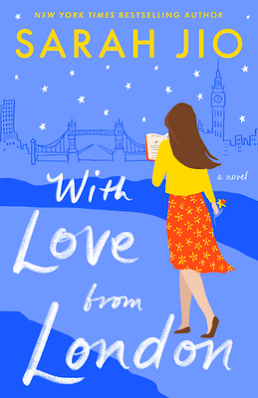 Beginning:  "There are far better things ahead than any we leave behind," says the stranger sitting next to me on the airplane--a sixtysomething woman with feathered bangs and a hair tie clinging so tightly to her left wrist that I've spent most of the flight worried it might turn into a medical emergency."

56% of eBook:  A long time ago, Frank had squashed my hope of making that dream a reality. But ten years had passed since then, and I wondered if this time, I could convince him.

My thoughts:  With Love from London is the story of Eloise and Valentina, a mother and daughter who were physically separated from each other by unimaginable circumstances. Eloise abruptly returns to London--the city of her birth--without explanation, leaving her adolescent daughter and husband in their family home in Santa Monica, California. Valentina never hears from or sees her mother again,

After her mother's death, Valentina visits London for the first time, where she claims ownership of the bookstore she has inherited from Eloise. Valentina sees this as an opportunity to move on from her recent divorce and begin anew. With the help of her mother's best friend Millie, Valentina finds her footing, learning more about her mother and herself, and the reason her mother left all those years ago.

At turns heartbreaking and heartwarming, the novel explores romantic and family relationships; star-crossed loves; dreams, the roads not taken, and second chances; the consequences of choices; and the resilience of the human spirit.  Ms. Jio has created a cast of characters to cheer for as they navigate the course of love and life, seeking happiness and supporting each other along the journey.

From GoodReads: A librarian inherits a bookshop from her estranged mother, leading her halfway across the world on a journey of self-discovery that transcends time and honors the unbreakable bonds of love and family.
When librarian Valentina Baker was a teenager, her mother, Eloise, unexpectedly fled to her native London, leaving Val and her father on their own. Now in her thirties and fresh out of a failed marriage, Val feels a nagging disenchantment with her life--and knows she is still heartbroken over her mother's abandonment.In a bittersweet twist of fate, Val receives word that Eloise has passed away, leaving Val her Primrose Hill apartment and the deed to a bookshop Val never knew she'd owned. Though the news is devastating, Val finds herself more determined than ever to discover who her mother truly was. She jets across the Atlantic, departing Seattle for a new life in charming London.
Slowly but surely, Val begins to piece together Eloise's life in the UK, falling in love with her pastel-colored flat, cozy neighborhood, and tucked-away storefront. But when she discovers that The Book Garden is in danger of going under, Val must work with its eccentric staff to get it in working order. In the process, she learns more about Eloise than she ever thought possible. And as Val races to save the shop, Eloise's own story unfolds, leading both mother and daughter to unearth revelatory truths.