. . . First Chapter ~ First Paragraph Tuesday Intros . . . now hosted by Yvonne at Socrates' Book Reviews, where bloggers share excerpts from a book they have read, are currently reading, or are planning to read.
Today I'm featuring an upcoming read, Anxious People by Fredrik Backman.  The excerpt shared is from a copy I purchased. 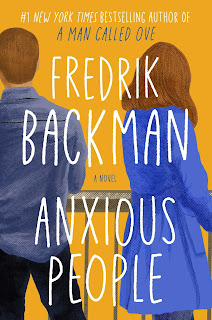 Beginning:  1
A bank robbery.  A hostage drama.  A stairwell full of police officers on their way to storm an apartment.  It was easy to get to this point, much easier than you might think. All it took was one single really bad idea.
What do you think?  Would you continue reading?
The short sentence structure and information shared is an immediate hook.  Of additional interest is the author, who has become a favorite of mine for his story and character development. 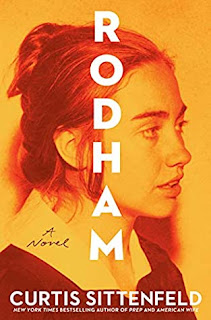 . . . First Chapter ~ First Paragraph Tuesday Intros . . . now hosted by Yvonne at Socrates' Book Reviews, where bloggers share excerpts from a book they have read, are currently reading, or are planning to read.
Happy Book Birthday to a recent read, To Tell You the Truth by Gilly Macmillan, which is being released today!  I was fortunate to receive an advance reader copy of this domestic thriller from the publisher. 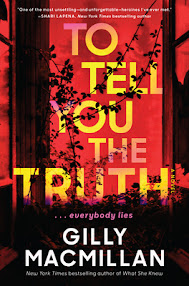 Beginning:  Prologue
There are the facts, and then there is the truth.
Chapter 1
I typed "The End," clicked the save button, and clicked it again just to make sure.  I felt huge relief that I'd finished my novel, and on top of that a heady mixture of elation and exhaustion.  But there were also terrible nerves, much worse than usual, because typing those words meant the consequences of a secret decision that I'd made months ago would have to be faced now.
What do you think?  Would you continue reading?
The opening lines to both the prologue and first chapter are compelling teasers . . .
Here are my thoughts about Gilly Macmillan's latest novel . . .
From all outward appearances, Lucy Harper is a successful crime fiction author happily married to her husband Dan and adored by the legion of fans devoted to her Eliza Grey series. Nothing could be further from the truth . . .
Lucy is damaged and fragile--haunted by the traumatic disappearance of her younger brother when they were children and the police's questions afterwards--and now subject to her husband's cruelty and gaslighting. When Dan goes missing shortly after the couple moves into a house bordering the woods where her brother Teddy was last seen alive, Lucy's grip on reality begins to unravel. Once again she is the prime suspect in a high-profile investigation. The police want to know if Lucy played a hand in Dan's disappearance, while questions about Teddy's disappearance reemerge.

What does Lucy know about these cases? What is the truth--how much of it is she willing to reveal--and to what consequences? In To Tell You the Truth, Gilly Macmillan has written yet another masterful tale of domestic suspense with mysterious and sinister undertones that draw readers into a powerful web of secrets and betrayals delivered by an unreliable narrator.

Today I’m participating in the 15 Minutes of Flame Great Escapes Blog Tour.  In this post you’ll find information about the book and author along with my review.  And be sure to enter the giveaway for a chance to win a print ARC copy of the book.

When Stella's friend inherits a creaky, abandoned home in Nantucket, she knows it's the perfect setting for the town's annual Halloween fundraiser. A deserted, boarded-up building on the property--once used as a candle-making shop--adds to the creepy ambiance. But as Stella explores the shack's dilapidated walls, she discovers a terrible secret: the skeleton of a Quaker woman, wrapped in blood-soaked clothing and hidden deep within a stone hearth . . .

While police investigate, Stella wastes no time asking for help from friends with long ties to Nantucket's intricate history. The key to the murder may lie within a scorching 18th century love triangle that pit two best friends against one another over a dubious man. But before the case is solved, another life will be claimed--leaving Stella to wonder who in Nantucket is friend, and who is foe . . .

My review . . . The annual Halloween Haunt fundraiser to benefit Nantucket’s neediest will be held at a new venue this year—the creepy, abandoned Morton House. Candle maker extraordinaire Stella Wright has volunteered to help with the event, and while exploring the property, she uncovers the skeleton of a Quaker woman in a shack on the grounds.  The shocking discovery reignites interest in the long-ago mystery surrounding the relationship of two best friends, the charming rogue who came between them, and their subsequent deaths.

The discovery and ensuing police investigation draw people from on- and off-island who have special and/or personal interest in the case.  As they vie for a chance at their own fifteen minutes of fame, one of them is found dead, the victim of a strangling.  Does a centuries-old corpse hold valuable secrets worth killing for?  And who is motivated enough to stop at nothing to achieve personal gain?

15 Minutes of Flame is an engrossing cozy mystery steeped in Nantucket history and lore.  Its numerous red herrings and strong suspect list will keep readers guessing whodunit until all is revealed at a party Stella hosts in the story’s closing pages.  In author Christin Brecher's capable hands, protagonist and clever sleuth Stella becomes more deeply involved in the island community in this third Candle Marker Mystery—and carefully placed hints about future developments in Stella's personal life firmly cement further interest in the series.  With autumn and Halloween fast approaching, 15 Minutes of Flame is a particularly satisfying read—and one that will leave readers eager for the next installment.

Giveaway . . . Enter the 15 Minutes of Flame Giveaway for the chance to win one of five print ARC copies of the book (U.S. only) by clicking on this link.

About the author . . .  Christin Brecher was born and raised in NYC, where her family and many childhood friends still reside. As such, she feels she is as much of a small-town girl as any. The idea to write the Nantucket Candle Maker series sprang from her life-long connection to the small island off the coast of Massachusetts. Spending summers there as a child, Christin read from her family’s library of mystery novels, after which she began to imagine stories inspired by the island’s whaling heyday, its notoriously foggy nights, and during long bike rides to the beach.

After many years in marketing for the publishing industry, followed by years raising her children, Christin's debut novel, Murder’s No Votive Confidence, first book in the Nantucket Candle Maker mystery series, was published. 15 Minutes of Flame is the third book of the series.

September 15 – I Read What You Write – SPOTLIGHT

September 17 – I’m All About Books – SPOTLIGHT

September 19 – Reading Is My SuperPower – REVIEW

September 21 – Cozy Up With Kathy – REVIEW

Note . . . I received a complimentary copy of 15 Minutes of Flame from the publisher via #NetGalley in exchange for an honest review.


This Blog Tour, Review, and Giveaway post was originally composed and/or compiled and published by Catherine for the Book Club Librarian blog.  It cannot be republished without attribution.