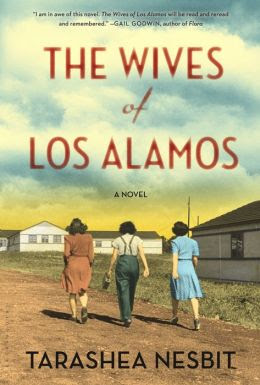 Beginning:  1943  West
Over the Black Sea, the Mediterranean, the Pacific, the Arctic, the Atlantic; in sewers, in trenches, on the ocean, in the sky: there was a war going on.  Sometimes it seemed far away, barely happening, but then a mother or wife placed a gold star in her living room window--her brother, her husband, her son, our neighbor--and the war became personal.

From barnesandnoble.com: Their average age was twenty-five. They came from Berkeley, Cambridge, Paris, London, Chicago—and arrived in New Mexico ready for adventure, or at least resigned to it. But hope quickly turned to hardship as they were forced to adapt to a rugged military town where everything was a secret, including what their husbands were doing at the lab. They lived in barely finished houses with P.O. box addresses in a town wreathed with barbed wire, all for the benefit of a project that didn’t exist as far as the public knew. Though they were strangers, they joined together—adapting to a landscape as fierce as it was absorbing, full of the banalities of everyday life and the drama of scientific discovery.

And while the bomb was being invented, babies were born, friendships were forged, children grew up, and Los Alamos gradually transformed from an abandoned school on a hill into a real community: one that was strained by the words they couldn’t say out loud, the letters they couldn’t send home, the freedom they didn’t have. But the end of the war would bring even bigger challenges to the people of Los Alamos, as the scientists and their families struggled with the burden of their contribution to the most destructive force in the history of mankind.

The Wives of Los Alamos is a novel that sheds light onto one of the strangest and most monumental research projects in modern history. It's a testament to a remarkable group of women who carved out a life for themselves, in spite of the chaos of the war and the shroud of intense secrecy.

Enjoy life with books . . .
Catherine
Friday Focus: The Friday 56 & Book Beginnings #37 was originally published by Catherine for bookclublibrarian.com. This post cannot be republished without attribution.