It's Friday . . . time to share book excerpts with:
Today I'm featuring my current read, Poison by Galt Niederhoffer.  The excerpts shared are from a hardcover edition I borrowed from the library. 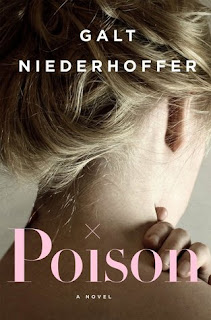 Beginning:  Prologue
This story takes place in a home, if such a concept can be trusted, a home in which a family lives and loves one another.

One
It's Thursday night, just after six, and Cass does the things of a mother.

********************
My thoughts:  Niederhoffer takes readers behind the scenes of the marriage of a seemingly normal couple that is coming apart at the seams.  Lies, secrecy, and cruelty are major components of this psychological thriller.

From Goodreads:  Poison is a literary psychological thriller about a marriage that follows minor betrayal into a bubbling stew of lies, cruelty, manipulation, and danger.

Cass and Ryan Connor have achieved family nirvana. With three kids between them, a cat and a yard, a home they built and feathered, they seem to have the Modern Family dream. Their family, including Cass' two children from previous relationships, has recently moved to Portland —a new start for their new lives. Cass and Ryan have stable, successful careers, and they are happy. But trouble begins almost imperceptibly. First with small omissions and white lies that happen daily in any marital bedroom. They seem insignificant, but they are quickly followed by a series of denials and feints that mushroom and then cyclone in menace.

With life-or-death stakes and irreversible consequences, Poison is a chilling and irresistible reminder that the closest bond designed to protect and provide for each other and for children can change in a minute.

This Friday Focus post was originally written and published by Catherine for bookclublibrarian.com.  It cannot be republished without attribution.  Retweeting and sharing on Google+ are appreciated.
Posted by Catherine @ Book Club Librarian at 9:57 PM