It's Friday . . . time to share book excerpts with:
Today I'm featuring an upcoming read, Teetotaled by Maia Chance.  The excerpts shared are from a hardcover version borrowed from the library. 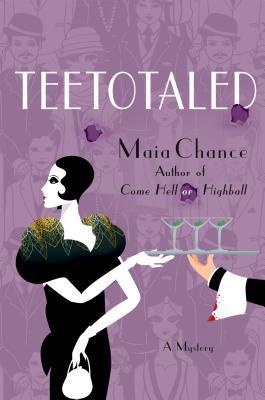 Page 56: "Hermie will be going to the swimming pool soon, and we wished to learn if he has come into big money as the result of his sister's death."
********************
My thoughts:  As I learned by reading Come Hell or Highball, the first book in the Discreet Retrieval Agency Mystery Series, protagonist Lola Woodby and her sidekick Berta may be destitute, but they are witty and resourceful.  I'm looking forward to catching up with their next escapade.


********************
From Goodreads:  In Maia Chance’s follow-up to her acclaimed Prohibition-era caper Come Hell or Highball, Lola Woodby is hired to find a diary, but soon the diary owner’s future mother-in-law is murdered.

After her philandering husband died and left her penniless in Prohibition-era New York, Lola Woodby escaped with her Swedish cook to the only place she could—her deceased husband’s secret love nest in the middle of Manhattan. Her only comforts were chocolate cake, dime store detective novels, and the occasional highball (okay, maybe not so occasional). But rent came due and Lola and Berta were forced to accept the first job that came their way, ultimately leading them to set up shop as a Discreet Retrieval Agency, operating out of Alfie’s cramped love nest.

Now they’re in danger of losing the business they’ve barely gotten off the ground—they haven’t had a job in months and money is running out. So when a society matron offers them a job, they take it—even if it means sneaking into a detox facility and consuming only water and health food until they can steal a diary from Grace Whiddle, a resident at the “health farm.” But barely a day in, Grace and her diary escape from the facility—and Grace’s future mother-in-law is found murdered on the premises. Lola and Berta are promptly fired. But before they can climb into Lola’s red and white Duesenberg Model A and whiz off the property, they find themselves with a new client and a new charge: to solve the murder of Grace’s future mother-in-law.
********************
This Friday Focus: The Friday 56 & Book Beginnings post was originally composed and/or compiled and published by Catherine for the blog, bookclublibrarian.com.  It cannot be republished without attribution. Sharing this original post on Twitter, Google+ and/or other blogs with appropriate recognition is appreciated.
Posted by Catherine @ Book Club Librarian at 9:00 PM