It's Friday . . . time to share book excerpts with:
Today I'm featuring a recent read, The Wife by Meg Wolitzer.  The excerpts shared are from the trade paperback I purchased to take on vacation. 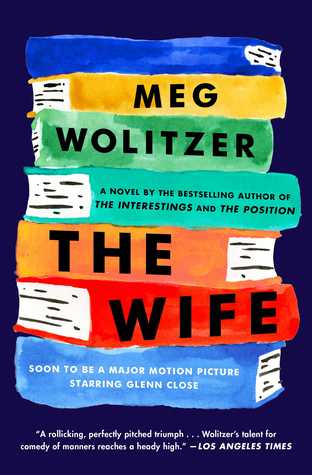 Beginning: The moment I decided to leave him, the moment I thought, enough, we were thirty-five thousand feet above the ocean, hurtling forward but giving the illusion of stillness and tranquility.
********************

Page 56: "Here on Bancroft Road, it appeared that I was in a land in which everyone seemed to have stopped themselves from going too far."
********************
My thoughts:  I haven't blogged at all in January, except for a First Book of the Year post.  I had some time off from work and went on a 12-day Caribbean cruise to Puerto Rico, St. Maarten, St. Kitts, Barbados, St. Lucia, and Antigua. Although I brought several books with me, the only one I actually finished was The Wife.  I was first attracted to this book when I learned that a movie based on the story had been released, starring Glenn Close, one of my all-time favorite actors.

I haven't seen the movie yet, but the novel tells the story of an older couple who have been married for 40 years.  Although the book was a bit too slowly-paced for my liking, there were many realistic observations of a long-term traditional relationship centered around a man's career and the sacrifices made by a wife to build and support a husband's success.  Wolitzer has a way with words, presenting the situation with astute language and phrasing, and giving readers lots of food for thought.

********************
From Goodreads:  Meg Wolitzer brings her characteristic wit and intelligence to a provocative story about the evolution of a marriage, the nature of partnership, the question of a male or female sensibility, and the place for an ambitious woman in a man's world. The moment Joan Castleman decides to leave her husband, they are thirty-five thousand feet above the ocean on a flight to Helsinki. Joan's husband Joseph is one of America's preeminent novelists, about to receive a prestigious international award, and Joan, who has spent forty years subjugating her own literary talents to fan the flames of his career, has finally decided to stop. From this gripping opening, Meg Wolitzer flashes back to Smith College and Greenwich Village in the 1950s and follows the course of the marriage that has brought the couple to this breaking point--one that results in a shocking revelation. With her skillful storytelling and pitch-perfect observations, Wolitzer has crafted a wise and candid look at the choices all men and women make in marriage, work, and life.
********************
This Friday Focus: The Friday 56 & Book Beginnings post was originally composed and/or compiled and published by Catherine for the blog, bookclublibrarian.com.  It cannot be republished without attribution. Sharing this original post on Twitter, Google+ and/or other blogs with appropriate recognition is appreciated.