Today I'm featuring The Ruin by Dervla McTiernan. The excerpts shared are from a trade paperback copy borrowed from the library. 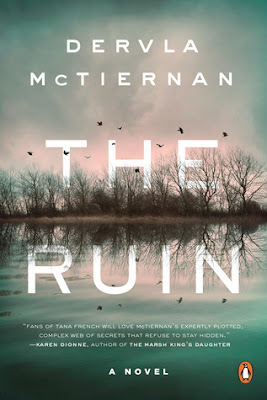 Prologue
Cormac leaned forward to peer through the windscreen, then nearly cracked his head on the steering wheel as the car bounced through another pothole.  Shite.  There was no sign of the house, and he'd been searching for over an hour.  He could barely read house names or numbers in the settling gloom.  Maybe the whole thing was some kind of first-week hazing ritual.  If it had been Dwyer who'd sent him he would have been sure of it.  Dwyer was the sort of bastard who was forever telling jokes, jokes with an edge to them and usually a target.  But it had been Marcus Tully who'd called him in off traffic duty, barely looking up from his newspaper as he handed Cormac the post-it note that was now stuck to his dashboard.

Teaser:  He got no further after that.  Her answers got vaguer, and started to wander into old memories that had little relevance to the Blakes.  He felt sure that her sudden senility was an act, but equally didn't know what else, if anything, he could hope to get from her.

What do you think?  Would you continue reading?
This story drew me in from the very beginning and held my interest throughout.

My thoughts:  When DI Cormac Reilly transfers from Dublin to Galway, he is drawn back into a case that has haunted him for the past twenty years. Ruled an accidental drug overdose, the death of Hilaria Blake was the detective's very first case in 1993. Decades later, when Hilaria's son Jack is found dead in 2013, his death is considered a suicide. But is it possible the two deaths are linked, and that they weren't tragic accidents after all? Reilly is tasked with reopening the twenty-year old case on suspicion that Hilaria might have been murdered. And there are hints that Jack might have met a similar fate. Author Dervla McTiernan weaves together a complex sinister web of secrets and past despicable acts which collides with a series of current clandestine misdeeds in this first book in the Cormac Reilly series. Reilly, an outsider, doesn't know who can be trusted as he uncovers a dark shared history and complicit coverups. In his pursuit of the truth, will the detective's investigation bring closure and justice, or will it end his career on the police force?

This First Chapter ~ First Paragraph and Teaser Tuesday post was originally composed and/or compiled and published by Catherine for the blog, bookclublibrarian.com.  It cannot be republished without attribution. Sharing this original post on Twitter with appropriate recognition is appreciated.
Posted by Catherine @ Book Club Librarian at 9:00 PM