Today I’m participating in the Murder Most Pemberley Great Escapes Blog Tour. In this post you’ll find information about the book and author along with my review. And be sure to enter the giveaway contest below for a chance to win a signed copy of the book and some Jane Austen swag. 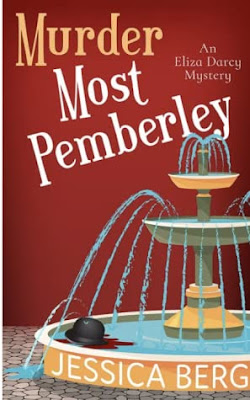 Synopsis . . . Eat a crumpet. Check. Say "bloody hell" in an English pub. Check. Solve three murders and fall in love? Definitely not on the list. But when England dishes up murder, even an American girl knows it's time to channel her inner Agatha Christie.

American Eliza Darcy travels to Merry Old England to partake in a Darcy/Bennet family reunion for one reason: to solve the estrangement between her father and uncle. Not long after Eliza's arrival and exploration of the vast estate of her ancestors, a dead body surfaces. Murder and mayhem replace afternoon teas and flirting with her British heartthrob. Eliza has every intention of keeping her snoot out of official Scotland Yard business, but when clues to the murder begin to merge with her investigation into her family's rift, her inner wannabe sleuth self-activates.

With the help of her batty great-aunt and the sexy Heath Tilney, Eliza hurries to untangle the web of lies and secrets. As corpses start to pile up faster than the clues, Eliza fears the estate's family graveyard will swallow another body: hers.

My review . . . When American creative writing teacher Eliza Jane Darcy accepts an invitation to her first Darcy-Bennet reunion at Pemberley, the family estate in England, she sees it as an opportunity to visit the place her father Andrew left without explanation twenty-five years earlier, meet her extended family, and distract herself from a recent break up.
Delighted to be reunited with her cousin Joy, Eliza is enchanted by the stately property, charmed by her father's brother Fitzwilliam who runs the estate, and bemused by her great-aunt Iris. But she is less than impressed with Fitzwilliam's wife, the pretentious Nancy and the insufferable members of the Wickham branch of the family. While Eliza would like nothing better than to learn what caused the estrangement between her father and uncle and facilitate a reconciliation, her focus is diverted to another mystery when a body is found floating in a fountain on the estate. Who is the killer on the loose at Pemberley?
Realizing that a conversation she overheard in the garden may be linked to the murder, Eliza enlists her cousin Joy, Aunt Iris, and handsome new acquaintance Heath Tilney to help her investigate. Eliza has a natural instinct for finding clues and unearthing secrets, which leads her to uncover dastardly deeds and deceptive alliances that others are desperate to protect. Over the next few days, several more assaults and murders occur and Eliza's own safety is threatened as she gets closer to the truth. Who is responsible for the murder and mayhem at Pemberley, is there a connection to the brothers' estrangement, and will Eliza and those she has come to love escape unharmed?
Murder Most Pemberley, the first book in the Eliza Darcy cozy mystery series, is brimming with appeal factors: its English manor setting; family secrets and dynamics; upstairs-downstairs aspects; lively dialog and use of British slang; a tall, dark, and handsome love interest; and a quirky cast of characters. Readers will appreciate the story's Austen-like qualities; i.e., the enduring charm of the Pemberley estate and contemporary characters who bring to mind Austen's own--the traditional manor staff; Lord Fitzwilliam Darcy with his mutton chops hairstyle; spunky, eccentric great-aunt Iris; and, of course, the dashing Heath Tilney, who bears a strong resemblance to one of Austen's most well-known male love interests.
Author Jessica Berg has created engaging characters and relationships with ample room for story expansion and growth. It will be interesting to watch the future unfold for budding sleuth Eliza, her new beau Heath, and the entire Darcy-Bennet clan.
About the author . . .

Jessica Berg, a child of the Dakotas and the prairie, grew up amongst hard-working men and women and learned at an early early age to “put some effort into it.” Following that wise adage, she has put effort into teaching high school English for over a decade, being a mother to four children (she finds herself surprised at this number, too), basking in the love of her husband of more than fifteen years and losing herself in the imaginary worlds she creates.
Author links . . . Website – Facebook – Instagram – Pinterest – Twitter
Purchase links . . . Amazon – Kobo – B&N – Books2Read
Giveaway . . . Enter the Murder Most Pemberley giveaway contest for a chance to win a signed copy of the book and some Jane Austen swag by clicking here.

June 22 – Escape With Dollycas Into A Good Book – SPOTLIGHT

June 24 – I Read What You Write – REVIEW, AUTHOR INTERVIEW

Note . . . I received a complimentary copy of Murder Most Pemberley from the publisher in exchange for an honest review.

This Blog Tour and Review post was originally composed and/or compiled and published by Catherine for the Book Club Librarian blog.  It cannot be republished without attribution.