Today I'm featuring my current read, Lady Takes the Case by Eliza Casey. The excerpts shared are from a trade paperback edition borrowed from the library. 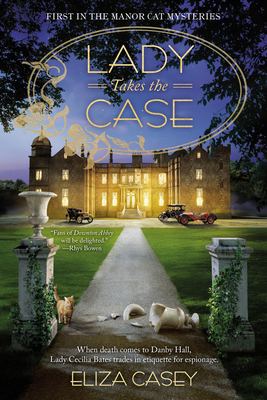 When Colonel Havelock bicycled through the tall iron gates, past the gatehouse, up the long gravel drive, and along the lane of ancient oak trees, he found a scene of utter chaos.

My thoughts: Danby Hall puts one in mind of Downton Abbey in terms of setting and time period. When a guest collapses and dies during a dinner party at the stately manor, it is quickly discovered that he ingested a tainted beverage. Was Richard Hayes the intended victim, or was the poison meant for Annabel Clarke, the American heiress and guest of honor whom the Aveburys hope will save their estate from ruin by marrying into the family? Lady Cecilia Bates, the family's young debutante, is determined to find out.

There is no shortage of suspects both above and below stairs in this delightful first installment of the Manor Cat Mysteries series. A proper cup of tea has added to my reading enjoyment as this traditional British mystery unfolds in perfect measure.

From GoodReads: When a dinner party turns deadly, the feisty Lady Cecilia Bates and intuitive cat Jack are on the case, in this first entry to an exciting new historical-mystery series.

England 1912. Danby Hall is the only home Lady Cecilia Bates has ever known. Despite the rigid rules of etiquette and her mother the Countess of Avebury's fervent desire to see her married off, Lady Cecilia can't imagine life anywhere else. But now, with an agricultural depression sweeping the countryside, the Bates family's possession of the hall is suddenly in peril.

A possible solution arrives in the form of the imperious American heiress Annabel Clarke. The Earl and Countess of Avebury are determined that Cecilia's brother, Patrick, will win Annabel's hand in marriage--and her fortune along with it. To help the lackluster Patrick in this pursuit, the Bates and their staff arrange a grand house party upon the heiress's arrival.

When a guest dies after sipping from a glass meant for Annabel, it's clear the Bates have a more poisonous problem on their hands than a lack of chemistry. As the scandal seizes Danby, Cecilia sets out to find the culprit, with help from Annabel's maid, Jane, and Jane's curiously intelligent cat, Jack.

After the poison that someone had stashed away inside the manor is discovered, Cecilia is left with two possibilities: Either a resident of Danby snapped and tried to kill the arrogant heiress, or the threat is coming from one of their guests, who would love to see the Bates family's decline become permanent.

*******************
This Friday Focus: The Friday 56 & Book Beginnings post was originally composed and/or compiled and published for the blog, bookclublibrarian.com. No portion can be republished without proper attribution.
Posted by Catherine @ Book Club Librarian at 8:30 PM