It's Friday . . . time to share book excerpts with:
Today I'm featuring The Baker Street Letters by Michael Robertson.  The excerpts shared are from a hardcover version borrowed from the library. 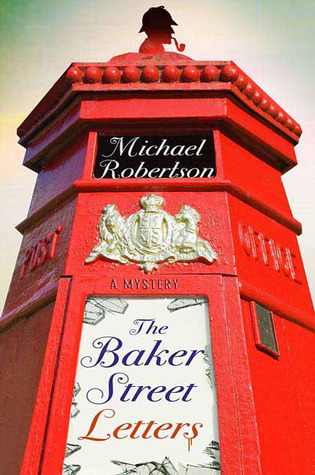 Beginning:  Prologue -- Los Angeles, 1997
He only wanted just one cigarette.
He knew he shouldn't, and not just because both of his ex-wives used to say so or because his doctor still said so.
**********
Chapter 1
"Why are you staring at me that way?"
********************
Page 56:  "And then he drove to Heathrow, with the address for the Los Angeles letter writer in his pocket."
********************
My thoughts:  I am always intrigued by books that incorporate a Sherlock Holmes angle.  In this book--the start of the Baker Street Letters series--two brothers, both attorneys with law offices in a building on Baker Street, are receiving letters addressed to Sherlock Holmes, which according to their lease they are obliged to answer.  My interest is certainly piqued.
*********************
From Goodreads:  In Los Angeles, a geological surveyor maps out a proposed subway route--and then goes missing. His eight-year-old daughter, in her desperation, turns to the one person she thinks might help--she writes a letter to Sherlock Holmes.

That letter creates an uproar at 221b Baker Street, which now houses the law offices of attorney and man about town Reggie Heath and his hapless brother, Nigel. Instead of filing the letter like he’s supposed to, Nigel decides to investigate. Soon he’s flying off to Los Angeles, inconsiderately leaving a very dead body on the floor in his office. Big brother Reggie follows Nigel to California, as does Reggie’s sometime lover, Laura---a quick-witted stage actress who’s captured the hearts of both brothers.

When Nigel is arrested, Reggie must use all his wits to solve a case that Sherlock Holmes would have savored and Sir Arthur Conan Doyle fans will adore.
Which book are you reading now or about to start?