It's Friday . . . time to share book excerpts with:
Today I'm featuring my most recent read, Death at the Emerald by R.J. Koreto.  The excerpts shared are from an advance copy.  (The book was published on November 7, 2017.) 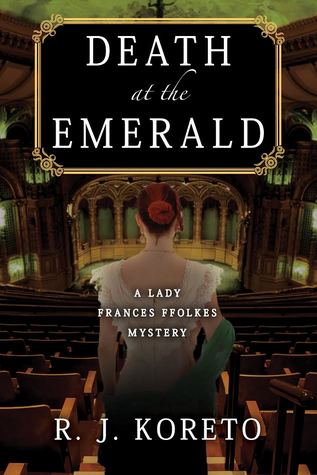 Beginning:
Lady Beatrice Torrence, widow of Sir Arnold Torrence, reflected wryly that she knew all the names of everyone at the party but none of the faces.  She had been abroad with her husband, from one posting to another, for so long and had come back to find that London was populated by the children and even grandchildren of those she had known a lifetime ago.

********************
56% of eBook: "Perhaps sensing that Frances was digging for more information, she now looked a little tense at the mention of the vicar's name."
********************
My thoughts:   This was a most enjoyable read for me in what has become one of my favorite historical mystery series.  Koreto's Lady Frances Ffolkes series features a Downton Abbey feel and lead character who is an unconventional woman determined to blaze her own trail -- despite her privileged birth -- in a world on the brink of change.  Read my review here, which includes a link to enter a giveaway of this book.

********************
From Goodreads:  An elderly family friend commissions Frances to find Helen, a stunningly beautiful actress who vanished 30 years ago. Taking on the role of the Lady Sherlock, with her loyal maid Mallow drafted as her Watson, Frances immerses herself in the glamorous world of Edwardian theater and London's latest craze—motion pictures.

Frances' first stop is the venerable Emerald Theatre, where aging actors are still in love with the memory of the beguiling Helen. It seems like a dead end—but one of Helen's old suitors is suddenly murdered. Frances and Mallow beat both the police and killer to a box of subtle clues. However, a stalker, another old suitor of Helen's long presumed dead, threatens them. Will Frances' latest hobby, a study of Japanese martial arts, be enough to save them?

Undaunted, Frances and Mallow follow their leads, and along the way get some advice from George Bernard Shaw, star in a motion picture, and joke with King Edward VII. Clues eventually lead them to a forgotten grave outside of London, which contains a mysterious biblical inscription--and a shocking secret. Frances finally assembles the pieces, and with Mallow as stage manager, produces her own play to uncover a decades-old conspiracy, reveal a killer—and find the remarkable Helen.