Thursday Thoughts: Blog Tour/Review and Giveaway--Death at the Emerald by R.J. Koreto 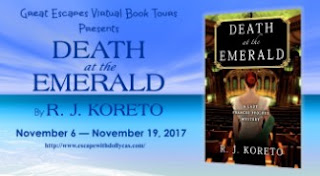 Today I'm participating in the Death at the Emerald Blog Tour.  In this post you will find book and author information along with my review.

About the Book . . .
Death at the Emerald: A Frances Ffolkes Mystery 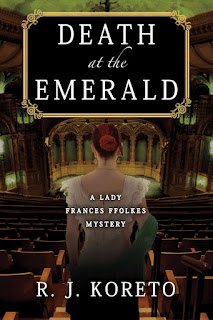 One-named stunning actress Helen mysteriously vanished 30 years ago. An elderly family friend is unable to bear not knowing any longer and commissions Lady Frances Ffolkes to track her down. Taking on the role of Lady Sherlock, with her loyal maid Mallow drafted as her Watson, Frances finds herself immersed in the glamorous world of Edwardian theater and London’s latest craze—motion pictures.

As Frances and Mallow make their way through the theaters, they meet colorful figures such as George Bernard Shaw and King Edward VII. Tracking the theaters seems like a dead end. That is until one of Helen’s old suitors is suddenly murdered. With the stakes raised, Frances and Mallow work quickly to uncover a box of subtle clues to Helen’s whereabouts. But someone unexpected wants that box just as badly and is willing to kill to keep it shut.

The stage is set for murder and Frances and Mallow are determined to unravel the decades-old conspiracy in Death at the Emerald, R. J. Koreto’s third installment in the captivating Lady Frances Ffolkes mysteries.
My review . . .
With two solved cases to her credit and deductive skills that rival the great Sherlock Holmes, Lady Frances's reputation as London's first female consulting detective is firmly established.  In this latest installment, Franny is retained by Lady Beatrice Torrence to investigate the fate of her daughter who disappeared in 1875 after leaving home to join the Green Players theater group rather than become the companion to an officer's widow abroad.  Seeking peace of mind about her beloved rebellious child, the aging Lady Torrence asks Frances to either find her daughter or proof of her death.

Lady Frances, accompanied by her loyal maid June Mallow, begins the investigation at the Emerald Theater, home to the Green Players, where she interviews actors and theater workers, some of whom were in the theater's employ thirty years ago and knew the actress.  Several had harbored romantic feelings and were unsettled when the actress married someone not connected to the theater and left to pursue a life abroad.  Although the information initially shared isn't particularly enlightening to the case, there is a hint of secrets yet to be revealed.  And when one of the men recently questioned is found dead in an alley behind the theater, Lady Frances delves deeper into the past, leading her on an at times dangerous path to uncover the truth.  She and Mallow work tirelessly and creatively to solve the mystery of Miss Torrence's disappearance and give closure to her family.

Death at the Emerald is an engaging, entertaining mystery with a fascinating cast of characters. In addition to colorful theater folk, clergy, and people from different levels of society, there are cameo appearances by historical figures including the playwright George Bernard Shaw: King Edward VII and his mistress Alice Keppel (the real life great-grandmother of Camilla Parker Bowles); and Elizabeth Garrett Anderson, the first female British doctor. There are also amusing references to Sherlock Holmes and a Downton Abbey flair, and I commend the author for his creative detail and historical accuracy. Although the book can be read as a stand alone, once readers make the acquaintance of the high-spirited Lady Frances, they will surely want to follow her adventures by reading the previous two books in the series.

Koreto's Lady Frances Ffolkes series features a lead character who is an unconventional woman determined to blaze her own trail -- despite her privileged birth -- in a world on the brink of change.  A titled member of the aristocracy, Franny refuses to be defined by accepted social norms, much to the admiration of her fiance, the solicitor Henry Wheaton and the dismay of her brother, the marquess of Seaforth, Undersecretary for European Affairs in the Foreign Office.  Unlike her peers, Franny is an alumna of Vassar College and a suffragist.  In contrast to other single young women of the time who live with their families, Lady Frances lives with her maid at Miss Plimsoll's, a residential hotel intended for elderly widows.  She takes classes in juyutsu and rides about town on a bicycle.  Comfortable in her own skin, Frances is considered "eccentric," "odd," and "mad" by those in her own social circle, but this memorable character is anything but that to me. And while each book in the series has a different gem in its title, the real gem is Lady Frances herself.  I look forward to her continuing escapades in the books to come.

Anglophiles, fans of stories with strong female protagonists, cozy mystery readers, and historical fiction aficionados are sure to be delighted by this series.

For my thoughts on the first book in the series, Death on the Sapphire, which I read in August 2016 and a description of the second book, Death Among Rubies, which I will be reading soon, click here.

Giveaway . . .
Enter for a chance to win a copy of Death at the Emerald by R.J. Koreto by visiting this Rafflecopter link

In his day job, he works as a business and financial journalist. Over the years, he’s been a magazine writer and editor, website manager, PR consultant, book author, and seaman in the U.S. Merchant Marine. Like his heroine, Lady Frances Ffolkes, he’s a graduate of Vassar College.

With his wife and daughters, he divides his time between Rockland County, N.Y., and Martha’s Vineyard, Mass.


Note:  I received a complimentary advance copy of Death at the Emerald  in exchange for an honest review.

Thursday Thoughts: Blog Tour/Review and Giveaway--Death at the Emerald by R.J. Koreto was originally published by Catherine for bookclublibrarian.com. This post cannot be republished without attribution.

Retweeting and sharing on Google+ are appreciated.