It's Friday . . . time to share book excerpts with:
Today I'm featuring Plaid and Plagiarism by Molly MacRae.  The excerpts shared are from the hardcover version I borrowed from the library. 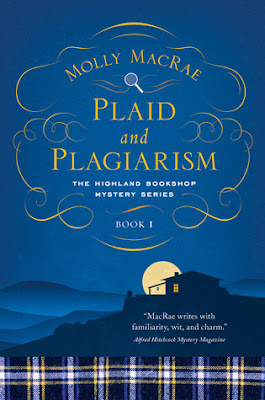 Beginning:  "And there's no need to cluck your tongue at my back, either," Christine said, not waiting for Janet to catch up.  "You know well enough it's time we went to see the house for ourselves and find out what the delay is."

My thoughts:  The opening paragraph doesn't reveal much about the story, so it's best to read the GoodReads synopsis below for the details.

I will say that I've been on a roll lately discovering new cozy mystery series centered around books.  Plaid and Plagiarism is the first book in The Highland Bookshop Mystery Series--a series I've been wanting to start for a while now.  The series is set across the pond in Scotland.

Book #2, Scones and Scoundrels was released in January, 2018.

********************
From GoodReads:  A murder in a garden turns the four new owners of Yon Bonnie Books into amateur detectives, in a captivating new cozy mystery novel from Molly MacRae.
Set in the weeks before the annual Inversgail Literature Festival in Scotland, Plaid and Plagiarism begins on a morning shortly after the four women take possession of their bookshop in the Highlands. Unfortunately, the move to Inversgail hasn’t gone as smoothly as they’d planned.First, Janet Marsh is told she’ll have to wait before moving into her new home. Then she finds out the house has been vandalized. Again. The chief suspect? Una Graham, an advice columnist for the local paper—who’s trying to make a name for herself as an investigative reporter. When Janet and her business partners go looking for clues at the house, they find a body—it’s Una, in the garden shed, with a sickle in her neck. Janet never did like that garden shed.Who wanted Una dead? After discovering a cache of nasty letters, Janet and her friends are beginning to wonder who didn’t, including Janet’s ex-husband. Surrounded by a cast of characters with whom readers will fall in love, the new owners of Yon Bonnie Books set out to solve Una’s murder so they can get back to business.A delightful and deadly new novel about recognizing one’s strengths and weakness—while also trying to open a new book shop—Plaid and Plagiarism is the start of an entertaining new Scottish mystery series.
********************
This Friday Focus post was originally written and/or compiled and published by Catherine for bookclublibrarian.com.  It cannot be republished without attribution.  Retweeting and sharing of this original post on Google+ are appreciated.