Thursday Thoughts: The Plot is Murder by V.M. Burns

Today I'm sharing my thoughts about a recent read, The Plot is Murder by V. M. Burns, the first book in the Mystery Bookshop Series. 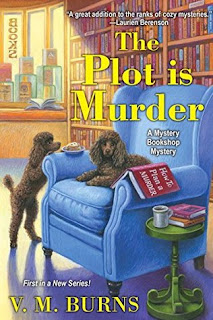 When recently widowed Samantha Washington leaves her teaching job to open a mystery bookshop in her hometown of North Harbor, Michigan, she never imagined that the store would become the site of its own murder mystery. As Market Street Mysteries--her lifelong dream--is about to become reality, Clayton Parker, the obnoxious broker who sold her the building, is found dead near its doorstep. Parker had amassed many enemies over the years, but Sam is considered a prime suspect in Clay's demise. Working to clear her name and reputation, Sam uncovers many reasons why someone would want Clay out of the picture. Can she identify the killer before she herself becomes a victim?
When Sam isn't sleuthing, she's writing her own cozy murder mystery set in England between the two world wars. This feature creates a fascinating "novel within a novel" combination of circumstances, with readers trying to solve not one--but two--murders.
In this first installment of the Mystery Bookshop series, Burns has established a lovable bookstore setting and team of close-knit family members and friends. Rounding out the cast of characters are Sam's two faithful poodles, Snickers and Oreo, adding another delightful aspect to the series. I am now eagerly awaiting Burns's next book and the opportunity to revisit these new fictional friends.

Note:  I borrowed this book from the library and received no compensation for my review.

This Thursday Thoughts post was originally written and published by Catherine for bookclublibrarian.com.  It cannot be republished without attribution.  Retweeting and sharing of this original post on Google+ are appreciated.