It's Friday . . . time to share book excerpts with:
Today I'm featuring an upcoming read, Tempt Me with Diamonds by Jane Feather.  The excerpts shared are from a paperback version borrowed from the library. 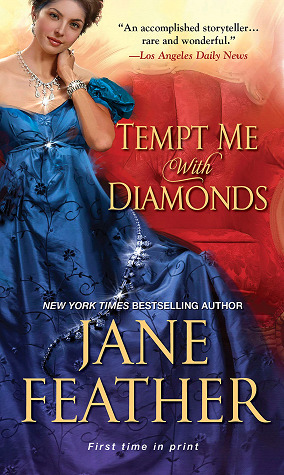 Beginning:  Chapter One - London, August 1902
Rupert Lacey, as his habit, moved from sleep to wakefulness in a matter of seconds.  He opened his eyes abruptly, aware of the faint gray light of dawn showing between a gap in the curtains and the unmistakable sense that something was happening in the house.  There was nothing specific to give him this feeling, no particular sound, just a stirring of the air, a sense of motion.  He sat up, reaching for the bellpull on the wall beside him.

It was answered within minutes.  Davis, his batman, came into the bedroom carrying a tea tray.  "Good morning, Colonel."  He set the tray by the bed and went to draw back the curtains.

*********************
My thoughts:  It's been a long time since I've read a historical romance, and this first book in the new London Jewels series caught my eye when I saw it on several websites and blogs.  I like the way the excerpts transport the reader to England in the early part of the twentieth century.

From Goodreads:  Three friends who met at an elite English boarding school take on the town—and the ton—one by one, in this sparkling new series about love, loss, and lustrous gemstones, from New York Times bestselling author Jane Feather...

Diana Sommerville seems to have it all—beauty, brains, and vast wealth, thanks to her family's ownership of a diamond mine abroad. But when her beloved brother dies in battle and leaves a lion's share of his estate to his best friend, Diana finds herself in a situation that seems scripted for the stage: Sharing her family home with the man she used to love—and now loathes. Worse, her unfaithful former fiancé has already moved in.

OR AN EXCELLENT FAKE?

Rupert Lacey didn't expect Diana to take the news without a fight. Still, he didn't expect her to bring the battle directly to their newly shared doorstep—complete with a full set of trunks, and a full set of orders to the staff. Yet there she is, bold, regal...magnificent as ever. Now they would face a formidable challenge: to ignore each other—and the unanswered questions that stood between them. The only sure thing is their still blazing desire. But with a woman like Diana, it will take nothing less than a momentous misunderstanding, a missing prized mare, and a shocking revelation to restore a love that hasn't lost its shine.