It's Friday . . . time to share book excerpts with:
Today I'm featuring an upcoming read, She Lies in Wait by Gytha Lodge.  The excerpts shared are from a hardcover version borrowed from the library. 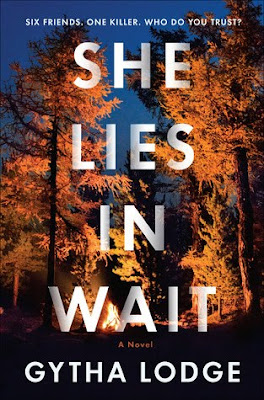 Beginning:  Prologue
She made her skittering, sliding way down the riverbank.  Her trainers hit the flat ground at the lip of the water, and she wobbled but recovered.

This is the first book in the new DCI Jonah Sheens series, and I like the idea of getting into a series so soon after the first book has been released.
********************
From Goodreads:  On a scorching July night in 1983, a group of teenagers goes camping in the forest. Bright and brilliant, they are destined for great things, and the youngest of the group—Aurora Jackson—is delighted to be allowed to tag along. The evening starts like any other—they drink, they dance, they fight, they kiss. Some of them slip off into the woods in pairs, others are left jealous and heartbroken. But by morning, Aurora has disappeared. Her friends claim that she was safe the last time they saw her, right before she went to sleep. An exhaustive investigation is launched, but no trace of the teenager is ever found.
Thirty years later, Aurora’s body is unearthed in a hideaway that only the six friends knew about, and Jonah Sheens is put in charge of solving the long-cold case. Back in 1983, as a young cop in their small town, he had known the teenagers—including Aurora—personally, even before taking part in the search. Now he’s determined to finally get to the truth of what happened that night. Sheens’s investigation brings the members of the camping party back to the forest, where they will be confronted once again with the events that left one of them dead, and all of them profoundly changed forever.


********************
This Friday Focus: The Friday 56 & Book Beginnings post was originally composed and/or compiled and published by Catherine for the blog, bookclublibrarian.com.  It cannot be republished without attribution. Sharing this original post on Twitter and/or other blogs with appropriate recognition is appreciated.
Posted by Catherine @ Book Club Librarian at 7:48 PM