It's Friday . . . time to share book excerpts with:
Today I'm featuring a recent blog tour read, Dead in a Week by Andrea Kane.  It's the latest book in the Forensic Instincts Series. The excerpts shared are from the eBook I received from the publisher in exchange for an honest review. 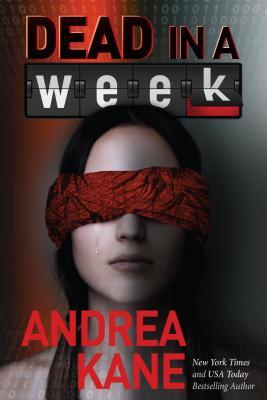 Normally, Lauren Pennington loved the sound of her combat boots clomping across the cobblestone apron.  But right now, all she could think about was the growling of her empty stomach, urging her to move faster.  She was oblivious to everything else--the couple on the corner sharing a passionate, open-mouthed kiss, the guy puking up his overconsumption of beer into the storm sewer grating, and the man watching her every move as he talked into his cell phone in a language that Lauren wouldn't have recognized had she been paying attention.

My thoughts:  Dead in a Week is a fast-paced, seat-of-your-pants thrill ride. You can read my review here, and enter a giveaway.

********************
From Goodreads:  Lauren Pennington is celebrating her junior year abroad when life comes to a screeching halt. At Munich's Hofbrauhaus, she engages in an innocent flirtation with a charming stranger for the length of a drink. Drink finished, Lauren leaves--only to be snatched from the streets and thrown into an unmarked van.

Officially, Aidan Deveraux is a communications expert for one of the largest financial firms in the world. In his secret life, the former Marine heads the Zermatt Group, a covert team of military and spy agency operatives that search the data stream for troubling events in an increasingly troubled world. When his artificial intelligence system detects Lauren's kidnapping, Aidan immediately sees the bigger picture.

Silicon Valley: Lauren's father, Vance Pennington, is about to launch a ground-breaking technology with his company NanoUSA--a technology that the Chinese are desperate for. No sooner does Aidan arrive on Vance's doorstep to explain the situation than the father receives a chilling text message: hand over the technology or Lauren will be dead in a week.

In a globe-spanning chase, from the beer halls of Germany, to the tech gardens of California, to the skyscrapers of China, and finally the farmlands of Croatia, Aidan's team cracks levels of high-tech security and complex human mystery with a dogged determination. Drawing in teammates from the Forensic Instincts team (introduced in The Girl Who Disappeared Twice), the Zermatt Group will uncover the Chinese businessmen responsible, find the traitors within NanoUSA who are helping them, and save Lauren from a brutal death

********************
This Friday Focus: The Friday 56 & Book Beginnings post was originally composed and/or compiled and published by Catherine for the blog, bookclublibrarian.com.  It cannot be republished without attribution. Sharing this original post on Twitter and/or other blogs with appropriate recognition is appreciated.
Posted by Catherine @ Book Club Librarian at 12:03 AM