Today I'm featuring a current read, The Girl Who Lived Twice by David Lagercrantz.  The excerpts shared are from a hardcover version borrowed from the library. 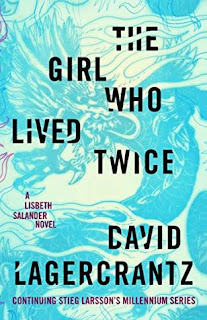 Beginning:  Prologue
A beggar nobody had seen before appeared in the neighbourhood that summer.  No-one knew him by name, nor seemed to care much about him, but to a young couple who passed him every morning he was the "crazy dwarf."
********************

Page 56: None of them looked all that pleased to see him, and Blomkvist kept his eyes on the table, drank his wine, and thought of Lisbeth Salander.
********************
My thoughts:  This is book #6 in the Millennium Series, which began with the much celebrated first book, The Girl With the Dragon Tattoo.  The original author, Stieg Larsson wrote the first three books in the series before his untimely death.  The current author has continued the series beginning with book #4, The Girl in the Spider's Web.  I've been enjoying the stories created by both authors, and the continuing saga of Lisbeth Salanader, one of my all-time favorite brave, take-no-prisoners feminist character.  Sadly, this may be the last book in the series.

********************
From Goodreads: Lisbeth Salander--the fierce, unstoppable girl with the dragon tattoo--has disappeared. She's sold her apartment in Stockholm. She's gone silent electronically. She's told no one where she is. And no one is aware that at long last she's got her primal enemy, her twin sister, Camilla, squarely in her sights.

Mikael Blomkvist is trying to reach Lisbeth. He needs her help unraveling the identity of a man who lived and died on the streets in Stockholm--a man who does not exist in any official records and whose garbled last words hinted at possible damaging knowledge of people in the highest echelons of government and industry. In his pocket was a crumpled piece of paper with Blomkvist's phone number on it.

Once again, Salander and Blomkvist will come to each other's aid, moving in tandem toward the truths they each seek. In the end, it will be Blomkvist--in a moment of unimaginable self-sacrifice--who will make it possible for Lisbeth to face the most important battle of her life, and, finally, to put her past to rest.
********************


This Friday Focus: The Friday 56 & Book Beginnings post was originally composed and/or compiled and published by Catherine for the blog, bookclublibrarian.com.  It cannot be republished without attribution. Sharing this original post on Twitter, Google+ and/or other blogs with appropriate recognition is appreciated.
Posted by Catherine @ Book Club Librarian at 9:00 PM