Today I'm participating in the Partners in Crime blog tour of One Night Gone by Tara Laskowski. 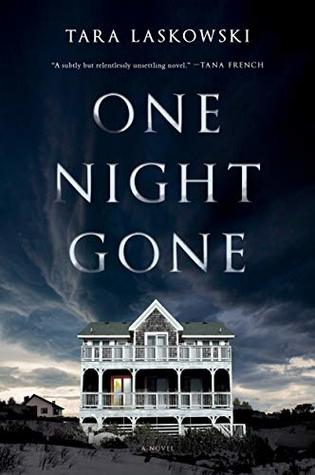 One sultry summer, Maureen Haddaway arrives in the wealthy town of Opal Beach to start her life anew—to achieve her destiny. There, she finds herself lured by the promise of friendship, love, starry skies, and wild parties. But Maureen’s new life just might be too good to be true, and before the summer is up, she vanishes.

Decades later, when Allison Simpson is offered the opportunity to house-sit in Opal Beach during the off-season, it seems like the perfect chance to begin fresh after a messy divorce. But when she becomes drawn into the mysterious disappearance of a girl thirty years before, Allison realizes the gorgeous homes of Opal Beach hide dark secrets. And the truth of that long-ago summer is not even the most shocking part of all . . .

My Review . . . In One Night Gone, the debut novel by Tara Laskowski, two women, three decades apart seek refuge at Opal Beach during a three-month stay, each focused on regrouping and moving forward with her life . . .

Maureen Haddaway is at loose ends when she comes to the island during the summer of 1985 as part of a traveling carnival.  Allison Simpson arrives off-season in 2015 to house-sit after an ugly divorce.  These women have something in common: a determination to improve their prospects and live life on their own terms despite personal setbacks that damaged their sense of self-worth and emotional stability.  And each in her own way discovers that small towns like Opal Beach aren’t always kind to outsiders, especially when there is a difference in social status.

While living at Opal Beach, Maureen becomes fast friends with Tammy Quinn, a local girl; and soon she’s dating Clay Bishop, whose wealthy family owns a restaurant chain.  Although Maureen’s stay is meant to be temporary, she unexpectedly vanishes without a trace before summer’s end.  Tammy has been haunted by Maureen’s disappearance for the past thirty years, certain that she was murdered on the island.

Years later, as Allison settles in, she encounters many of the same residents Maureen once knew.  And Tammy, who now owns the local coffee shop, draws Allison into investigating the mystery of Maureen’s disappearance.  Allison’s search for information threatens to expose long-buried secrets and transgressions, and connecting the dots between Maureen’s relationships with people in Opal Beach puts both Allison and Tammy in danger.  Will they uncover the truth without risking their own personal safety?

One Night Gone is an engrossing mystery with a page-turning plot. Laskowski infuses the story with characters harboring dark secrets who are credible murder suspects, and uses multiple twists and turns to deliver a thrilling read.  Although One Night Gone is first and foremost a solid suspense novel, it is also a story about independent women who stand up for themselves, never giving up or feeling sorry for themselves.  Issues of social and gender status add dimension to the plot, and the author also creates a unique kinship between Maureen and Allison—women who never met and lived thirty years apart—a bond that ultimately honors Maureen’s struggle and helps Allison move forward with her own life.

This finely-crafted novel showcases Laskowski’s impressive writing skills, which are well-suited to the suspense genre.  I hope that One Night Gone is the first of many novels from this talented author.

Opal Beach was about a two-hour drive without traffic from downtown Philadelphia. It was somewhere halfway between Ocean City and Atlantic City and way less touristy. The beach always reminded me of vacations as a kid, running barefoot on hot sand, creating lopsided sand castles with plastic buckets, breaking crab legs and sucking out the meat. But there was also a sense of slowing down, of taking it all in, and I needed that now. I could feel the air change, the way it clung, coated, opened everything up.

Through the car windows, the October air was shockingly cold but also reviving. The salty air had always bothered my mother and sister, who complained it was too humid and their tongues felt strange, but I loved the way it worked its fingers into my hair and curled around the tendrils. It made me feel a little wild, a little different. Untamed. Like anything could happen.

Was I really doing this? Was I really pressing on this pedal, steering, guiding these four wheels to a stranger’s beach house, where I would live for the next three months alone? It had all happened so fast. A blur, really. Annie’s friend Sharon, with that same nurse-like efficiency that Annie had, set it all up so quickly that I’d barely had time to adjust to the idea before it was actually happening.

But I was used to life messing with me now, used to tripping over a curb or forgetting to eat breakfast or chipping a nail, waking up only to discover that everything I’d known to be true was suddenly different. So in some ways this journey, the picking up and leaving behind, felt like an emerging. Like Rockefeller, the hermit crab I’d bought on our family vacation one year at a boardwalk shack, I was crawling out of a dingy shell and moving into a shinier, larger home. (Unlike Rockefeller, though, I hoped I wouldn’t die from the soap residue that was left inside the new shell when someone tried to clean it too vigorously before setting him inside the cage.)
I drove down a two-lane road just off the ocean, the main drag for all the beachfront houses. I could imagine that on a weekend in July it looked like a parking lot as families navigated in or out of town, canoes and coolers tied up on their roof racks. But now it was eerily vacant, and I had the sense I was the last woman on earth, that in my quiet drive alone the rest of humanity had vanished. I was trying to decide if that was a good thing or not when a giant orange Hummer zoomed into view behind me and passed without slowing down. “Well, so much for that. Asshole,” I said.

The houses were dramatically large and looming, blocking what otherwise would’ve been a magnificent view. You could tell which ones were just rentals—the monstrosities with thirteen bedrooms and a six-car garage that five families could rent out at once. But further down the road, the houses had more style and character. The kind of places—lots of windows, big porches, nice landscaping—that would make your mouth water even without the lush ocean backdrop as icing on the cake.

I slowed as my GPS indicated I was getting close, but even so I almost missed the tiny driveway and its faded, weather-beaten road sign declaring my new mailing address: Piper Sand Road.
I had made it.

The long gravel drive split off halfway up, with one side leading to the Worthington house and the other side to their neighbor’s. When I’d first met the Worthingtons for my “job interview” just a few weeks before, I’d been so nervous about the whole thing that I’d taken the wrong driveway and parked in the neighbor’s lot and stared at it for a good minute before realizing the house number was wrong.

But now, pulling into the correct driveway slowly, it felt like an adventure movie soundtrack should be swelling. And our heroine finds her destiny.

I could imagine Annie’s reaction when she finally saw the house in person. It was stunning. The surrounding homes were propped up on beams, like old ladies hitching up their skirts so they wouldn’t get wet in the surf, but that just gave the Worthingtons’ house an understated effect. It stood confident and modest between them, a beach gingerbread house right out of a fairy tale, with light blue curtains and sweeping eaves.

I parked right at the porch steps and got out, wrapping my cardigan around me to stave off the whipping wind. The front porch was small but quaint, with two wooden rocking chairs and a small white table with flaking paint. I ran my palm along the back of one of the tall chairs, and it creaked from my touch. The chairs seemed to be more for decoration than sitting.

Dolores, Sharon’s sister who lived in town, was supposed to be meeting me to hand over the keys. Yet it seemed I’d arrived first. I’d had to come one week sooner than planned, as Patty and John had been whisked away to her mysterious assignment in Eastern Europe a little earlier than expected. Patty had called me from the airport with the news. I’d pictured her in her white visor and tennis sneakers rushing through the terminals, bags bouncing off her lower back as she breathlessly gave me instructions.

Still, I half expected Patty to appear in the window as I squatted down and peered inside the house. It was hard to see with the bright sun glaring at my back, but I could make out the shadowy silhouette of the large island counter in the middle of the kitchen. Beyond that room, I remembered, was the living room, with doors and stairs leading to all the many nooks of the house.

All empty now, waiting for me. A shiver curled from my spine up to my neck, unwinding inside me. Calm down, you idiot, I told myself. Not everything is a trap. Think positively, and positive things will come.
***
Excerpt from One Night Gone by Tara Laskowski. Copyright © 2019 by Tara Laskowski. Reproduced with permission from Graydon House Books (Harlequin). All rights reserved.

Author Bio  . . . TARA LASKOWSKI is the award-winning author of two short story collections, Modern Manners for Your Inner Demons and Bystanders, which was named a best book of 2017 by Jennifer Egan in The Guardian. She has had stories published in Alfred Hitchcock Mystery Magazine, Mid-American Review, and the Norton anthology New Micro: Exceptionally Short Fiction, among others. Her Ellery Queen Mystery Magazine story, “States of Matter,” was selected by Amy Hempel for the 2017 Best Small Fictions anthology, and her short story “The Case of the Vanishing Professor” is a finalist for the 2019 Agatha Award. 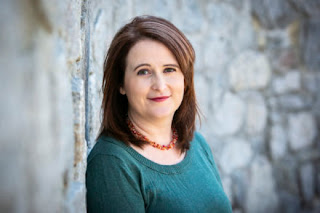 Tara was the winner of the 2010 Santa Fe Writers Project’s Literary Awards Prize, has been the editor of the popular online flash fiction journal SmokeLong Quarterly since 2010, and is a member of Sisters in Crime. She earned a BA in English with a minor in writing from Susquehanna University and an MFA in creative writing from George Mason University. Tara grew up in Pennsylvania and lives in Virginia. One Night Gone is her first novel.


Giveaway . . . Partners in Crime is hosting a rafflecopter giveaway for Harlequin and Tara Laskowski. There will be 1 winner of one (1) copy of One Night Gone (print). The giveaway begins on September 23, 2019 and runs through October 6, 2019. Open to U.S. and Canada addresses only. Void where prohibited.


Disclaimer . . . I was given a copy of One Night Gone in exchange for an honest review.