Today I'm featuring a current read, The Woman on the Orient Express by Lindsay Jayne Ashford. 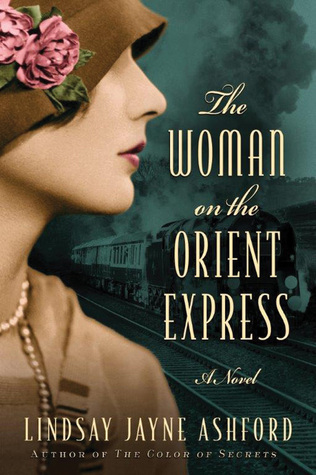 Beginning:  Prologue
August 1963
He comes from the river.  Steals into my garden without warning.  I am sitting in the camellia grove above the estuary, waiting for the sunset, watching a pair of oystercatchers at the water's edge, and trying to work out who is going to murder Major Palgrave.  The lapping of the tide lulls me to sleep, so I don't see the boat heading for the mooring.
* * * * * * * * * *

Can we be haunted by those who are not yet dead?  In the weeks that followed Agatha's divorce from Archie Christie, a ghostly part of him seemed to follow her everywhere.  Sitting in an empty house, she would hear his footsteps on the stairs.  Waking in the night, she would feel the weight of his body in the bed.  Opening the wardrobe, she would breathe in the familiar scent of shaving soap and cigarettes, even though his clothes were long gone.  It was as if her senses had joined the conspiracy to push her over the edge.

My thoughts:   This book was selected by one of my book clubs.  I am enjoying the story so far, particularly because the main character is Agatha Christie, who is taking a trip on the Orient Express under an assumed name.


********************
From Goodreads:  Hoping to make a clean break from a fractured marriage, Agatha Christie boards the Orient Express in disguise. But unlike her famous detective Hercule Poirot, she can’t neatly unravel the mysteries she encounters on this fateful journey.

Agatha isn’t the only passenger on board with secrets. Her cabinmate Katharine Keeling’s first marriage ended in tragedy, propelling her toward a second relationship mired in deceit. Nancy Nelson—newly married but carrying another man’s child—is desperate to conceal the pregnancy and teeters on the brink of utter despair. Each woman hides her past from the others, ferociously guarding her secrets. But as the train bound for the Middle East speeds down the track, the parallel courses of their lives shift to intersect—with lasting repercussions.

Filled with evocative imagery, suspense, and emotional complexity, The Woman on the Orient Express explores the bonds of sisterhood forged by shared pain and the power of secrets.