Today I'm featuring a recent blog tour read, Murder Makes Scents, the second book in the Nantucket Candle Maker cozy mystery series by Christin Brecher.  The excerpts shared are from the eBook I received from the publisher in exchange for an honest review. 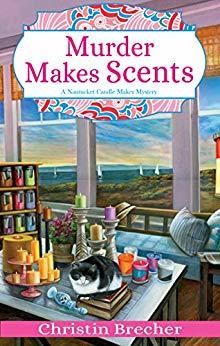 Beginning:  I was in heaven.

I was in Paris.

I was at Cire Trudon, one of the city's finest candle stores.

My thoughts:  Murder Makes Scents has a lively plot populated by spies, quirky locals, and an adventurous feline.  There's never a dull moment in this beach community no matter the season.
********************

From Goodreads:  Stella Wright loves creating candles at her Nantucket store—and she also has a burning passion for justice. Now, after visiting a perfume conference, she must solve a vial crime . . .

Stella and her globe-trotting mom, Millie, have come home from a perfume industry conference in Paris, where their trip was marred by witnessing the stabbing death of a young man. It’s a relief for Stella to be back on her picturesque island, with the comforting company of her cat, Tinker. But lingering danger may have followed them back across the ocean.

After someone breaks into her candle store, the Wick & Flame, Stella starts feeling spooked. And just as things threaten to ignite, Millie suffers a blow to the head. Stella receives an anonymous note claiming that her mother smuggled a secret formula out of France—and threatening her life if it isn’t returned. Now Stella’s picked up the scent of a cold-hearted criminal and an intriguing puzzle, and things are about to get wicked . . .

*******************
This Friday Focus: The Friday 56 & Book Beginnings post was originally composed and/or compiled and published by Catherine for the blog, bookclublibrarian.com.  It cannot be republished without attribution. Sharing this original post on Twitter with appropriate recognition is appreciated.