Today I’m participating in the Tea & Treachery Great Escapes Blog Tour.  In this post you’ll find information about the book and author along with my review.  And be sure to enter the giveaway for a chance to win a signed print copy of the book. 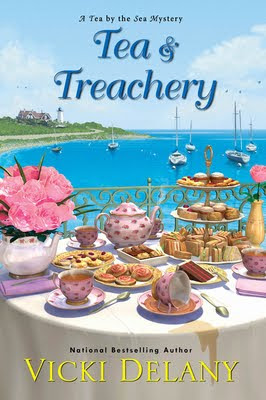 Synopsis . . . In this charming new cozy mystery series from nationally bestselling author Vicki Delany, a New York City expat-turned-Cape Cod tea shop owner must solve the murder of a local real estate developer to help her feisty grandmother out of a jam . . .

As the proud proprietor and head pastry chef of Tea by the Sea, a traditional English tearoom on the picturesque bluffs of Cape Cod, Roberts has her hands full, often literally. But nothing keeps her busier than steering her sassy grandmother, Rose, away from trouble. Rose operates the grand old Victorian B & B adjacent to Lily’s tea shop . . . for now. An aggressive real estate developer, Jack Ford, is pushing hard to rezone nearby land, with an eye toward building a sprawling golf resort, which would drive Rose and Lily out of business.
Tempers are already steaming, but things really get sticky when Ford is found dead at the foot of Rose’s property and the police think she had something to do with his dramatic demise. Lily can’t let her grandmother get burned by a false murder charge. So she starts her own investigation and discovers Ford’s been brewing bad blood all over town, from his jilted lover to his trophy wife to his shady business partners. Now, it’s down to Lily to stir up some clues, sift through the suspects, and uncover the real killer before Rose is left holding the tea bag.


My review . . . When Lily Roberts moved to Cape Cod—leaving her high-stress Manhattan restaurant job and abusive boyfriend behind—she imagined her fresh start would bring a slower-paced life.  She knew running an English tearoom beside her Grandmother’s bed and breakfast would be demanding, but this was the pastry chef’s dream come true.  What Lily never expected, however, was that she’d have to defend the feisty Rose against a murder charge . . .

Eighty-five-year-old Rose Campbell has been a community activist all her life, and when local developer Jack Ford announces plans to build a hotel and golf resort next door to her B & B, she very vocally expresses her opposition.  Shortly after clashing with him over the project, Jack’s lifeless body is found on Rose’s property, making her the police’s prime suspect.  There is never any doubt in the minds of Rose’s family and friends that she is innocent, but convincing Chuck Williams, the local detective assigned to the case, is a daunting task.

Rose’s network of allies comes to her defense.  They quickly discover that in the small town of North Augusta, Jack has made numerous enemies over the years through shady business deals and ill-fated romantic liaisons—many of whom have strong reasons to do him harm.  As clues to the perpetrator’s identity fall into place, Rose finds herself in the killer’s crosshairs.  Can she save herself, her grandmother, and their businesses from danger and disaster?

Tea & Treachery is a winning start to Delany’s newest series.  It has so many of the trademark elements of a successful cozy mystery: a desirable location (Cape Cod); a charming residence (Victorian B & B and adjoining tearoom); lovable pets (a cat named Robert the Bruce and a dog named Eclair); an appealing menu (varieties of tea, delectable sandwich morsels, and desserts); an ample amount of red herrings and suspects; love interests; and a loyal cast of engaging characters.  The mix of old and new friends complements the plot’s development and reader interest in this and future installments.  Delany has proven that she knows how to write a first-rate series, and with her expertise the groundwork is laid for another entertaining ongoing series—in this case, one that is sure to delight cozy mystery lovers, Anglophiles, beach-goers, and tea enthusiasts alike.

Giveaway . . . Enter the Tea & Treachery Giveaway for the chance to win a signed print copy of the book (U.S. only) by clicking on this link.

About the author . . . Vicki Delany is one of Canada’s most prolific and varied crime writers and a national bestseller in the U.S. She has written more than thirty-five books: clever cozies to Gothic thrillers to gritty police procedurals, to historical fiction and novellas for adult literacy. She is currently writing four cozy mystery series: the Tea by the Sea mysteries for Kensington, the Sherlock Holmes Bookshop series for Crooked Lane Books, the Year Round Christmas mysteries for Penguin Random House, and the Lighthouse Library series (as Eva Gates) for Crooked Lane.

Vicki is a past president of the Crime Writers of Canada and co-founder and organizer of the Women Killing It Crime Writing Festival. She is the 2019 recipient of the Derrick Murdoch award for contributions to Canadian crime writing. Vicki lives in Prince Edward County, Ontario.

Note . . . I received a complimentary copy of Tea & Treachery from the publisher via #NetGalley in exchange for an honest review.

This Blog Tour, Review, and Giveaway post was originally composed and/or compiled and published by Catherine for the Book Club Librarian blog.  It cannot be republished without attribution.