Today I'm featuring my current read, Sisters by Daisy Johnson. The excerpts shared are from an eBook I borrowed from the library. 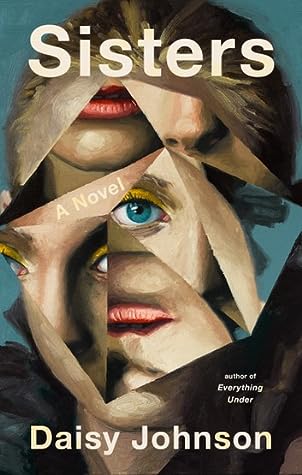 Beginning: Part 1
SEPTEMBER AND JULY
A house.  Slices of it through the hedge, across the fields.  Dirty white, windows sunk into the brick.  Hand in hand in the backseat, the arrow of light from the sunroof.  Two of us, shoulder-to-shoulder, sharing air.  A long way to come. This the year we are haunted.  What?  This the year, as any other, in which we are friendless, necessary only to ourselves.
********************
Page 56:  What are you looking at?
She doesn't answer.
********************
My thoughts:  Sisters September and July share a bond so close that it is hard to fathom where one ends and the other begins.  They live an insular life with their mother, Sheela, a children's book author whose bouts of depression sometimes leave the girls to fend for themselves.  After a traumatic event at school, the family relocates to an isolated cottage in Yorkshire, where their world becomes even smaller.
In Sisters, Johnson explores the dynamics between a mother and her daughters, and the intense relationship between headstrong, domineering September and easily manipulated July, who lives in her older sister's shadow.  As the story unfolds, the consequences of their interactions shape their future in grave and dramatic ways.
********************
From GoodReads:  From a Booker Prize finalist and international literary star: a blazing portrait of one darkly riveting sibling relationship, from the inside out.

"One of her generation's most intriguing authors" (Entertainment Weekly), Daisy Johnson is the youngest writer to have been short-listed for the Man Booker Prize. Now she returns with Sisters, a haunting story about two sisters caught in a powerful emotional web and wrestling to understand where one ends and the other begins.

Born just ten months apart, July and September are thick as thieves, never needing anyone but each other. Now, following a case of school bullying, the teens have moved away with their single mother to a long-abandoned family home near the shore. In their new, isolated life, July finds that the deep bond she has always shared with September is shifting in ways she cannot entirely understand. A creeping sense of dread and unease descends inside the house. Meanwhile, outside, the sisters push boundaries of behavior—until a series of shocking encounters tests the limits of their shared experience, and forces shocking revelations about the girls’ past and future.

Written with radically inventive language and imagery by an author whose work has been described as "entrancing" (The New Yorker), "a force of nature" (The New York Times Book Review), and "weird and wild and wonderfully unsettling" (Celeste Ng), Sisters is a one-two punch of wild fury and heartache—a taut, powerful, and deeply moving account of sibling love and what happens when two sisters must face each other’s darkest impulses.
********************
This Friday Focus: The Friday 56 & Book Beginnings post was originally composed and/or compiled and published by Catherine for the blog, bookclublibrarian.com.  It cannot be republished without attribution.
Posted by Catherine @ Book Club Librarian at 9:00 PM