Today I'm featuring my current read, Melania and Me by Stephanie Winston Wolkoff. The excerpts shared are from a hardcover version borrowed from the library. 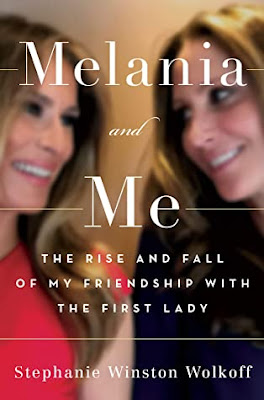 Beginning:  Prologue
Just Another Lunch
"Grab 'em by the p***y."
The sentence that reverberated around the world on October 7, 2016
^ ^ ^ ^ ^ ^ ^ ^ ^
Chapter 1
How to Marry a Billionaire
When I met Melania Knauss in 2003, we were both thirty-two years old and walking the hallways of Vogue.  I was working; she was visiting.
********************
Page 56:  Someone in Trump World didn't want Melania to shine.  We talked about who that might be.  Who stood to gain by making Melania look bad?
********************
My thoughts:  The sub-title of this book is The Rise and Fall of my Friendship with the First Lady. In this memoir, the author details the course of her relationship with Melania Trump.
Stephanie Winston Wolkoff, who comes across as a caring, competent, can-do woman, entered first into a friendship and then into a professional relationship with Melania Knauss Trump.  Generous with her time and attention, Stephanie was very supportive of her friend.  But she came to understand that this particular relationship was less than reciprocal.  While Stephanie was a giver, Melania was a taker.  At great personal expense, Stephanie acted to protect Melania in her public role as First Lady. But when the Trumps needed someone to take the blame for the fallout from the Inauguration Committee's finance scandal, Stephanie suffered a very public betrayal.
This fascinating account by someone with rare, close personal access offers insight into the behind-the-scenes inner workings of the early days of the Trump White House and the author's encounters with members of the Trump family and various political operatives vying for power, prestige, and attention.
********************
From Goodreads:  What Melania wants, Melania gets.

The former director of special events at Vogue and producer of nine legendary Met Galas, Stephanie Winston Wolkoff met Melania Knauss in 2003 and had a front row seat to the transformation of Donald Trump’s then girlfriend from a rough-cut gem to a precious diamond. As their friendship deepened over lunches at Manhattan hot spots, black-tie parties, and giggle sessions in the penthouse at Trump Tower, Wolkoff watched the newest Mrs. Trump raise her son, Barron, and manage her highly scrutinized marriage.

After Trump won the 2016 election, Wolkoff was recruited to help produce the 58th Presidential Inaugu­ration and to become the First Lady’s trusted advisor. Melania put Wolkoff in charge of hiring her staff, organizing her events, helping her write speeches, and creating her debut initiatives. Then it all fell apart when she was made the scapegoat for inauguration finance irregularities. Melania could have defended her innocent friend and confidant, but she stood by her man, knowing full well who was really to blame. The betrayal nearly destroyed Wolkoff.

In this candid and emotional memoir, Stephanie Winston Wolkoff takes you into Trump Tower and the White House to tell the funny, thrilling, and heartbreaking story of her intimate friendship with one of the most famous women in the world, a woman few people truly understand.

How did Melania react to the Access Hollywood tape and her husband’s affair with Stormy Daniels? Does she get along well with Ivanka? Why did she wear that jacket with “I really don’t care, do u?” printed on the back? Is Melania happy being First Lady? And what really happened with the inauguration’s funding of $107 million? Wolkoff has some ideas...