Today I'm featuring an upcoming read, A Question of Betrayal by Anne Perry.  The excerpts shared are from a hardcover version borrowed from the library. 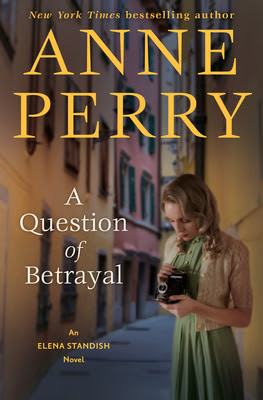 Beginning: Chapter 1
"What did you say?" Elena asked incredulously.  She could not believe what she just heard.
********************
Page 56:  There was a look of rueful understanding in Stoney's face.
********************
My thoughts:  This is Anne Perry's latest Elena Standish novel, part of her historical mystery series set in pre-World War II Europe.  The protagonist is a courageous young photographer who finds herself crossing paths with Britain's MI6.  The first book in the series was released in 2019, and the third book will be published in 2021.
With two books available now, it's not too late to get started reading this intriguing series--and the wait for the next book isn't too long.
Book 1:  Death in Focus
Book 3:  A Darker Reality, details will be available at a later date
********************
From GoodReads:  On her first mission for MI6, the daring young photographer at the heart of this thrilling new mystery series by bestselling author Anne Perry travels to Mussolini's Italy to rescue the lover who betrayed her.
Britain's secret intelligence service, MI6, has lost contact with its informant in northern Italy, just as important information about the future plans of Austria and Nazi Germany is coming to light. And young Elena Standish, to her surprise, is the only person who can recognize MI6's man--because he is her former lover. Aiden Strother betrayed her six years before, throwing shame on her entire family. Now, with so much to prove, Elena heads to Trieste to track down Aiden and find out what happened to his handler, who has mysteriously cut off contact with Britain.

As Elena gets word of a secret group working to put Austria in the hands of Germany, her older sister, Margot, is in Berlin to watch a childhood friend get married--to a member of the Gestapo. Margot and Elena's grandfather, the former head of MI6, is none too happy about the sisters' travels at this tumultuous time, especially when a violent event at home reminds him that even Britain is growing dangerous. As his own investigation collides with his granddaughter's, what's at stake on the continent becomes increasingly frightening--and personal.

Against the backdrop of a rapidly changing Europe, New York Times bestselling author Anne Perry crafts a novel full of suspense, political intrigue, and the struggle between love and loyalty to country
********************
This Friday Focus: The Friday 56 & Book Beginnings post was originally composed and/or compiled and published by Catherine for the blog, bookclublibrarian.com.  It cannot be republished without attribution.