Today I'm featuring an upcoming read, The Boy from the Woods by Harlan Coben. The excerpts shared are from a trade paperback in my personal collection. 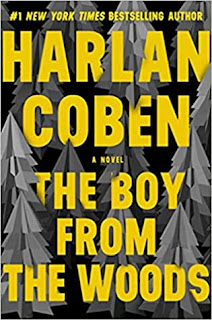 How does she survive?

How does she manage to get through this torment every single day?

Page 56:  Memory makes demands that you often can't keep. Memory is faulty because it insists on filling in the blanks.

My thoughts:  I haven't read any of the books in either of Coben's popular long-standing series, mostly because I am already committed to so many other series. Even so, I never miss an opportunity to indulge in one of his stand-alone novels.  They are always imaginative, twisty, and fast-paced.

From GoodReads:  In the shocking new thriller from the #1 New York Times bestselling author of Run Away, a man whose past is shrouded in mystery must find a missing teenage girl before her disappearance brings about disastrous consequences for her community . . . and the world.

The man known as Wilde is a mystery to everyone, including himself. Decades ago, he was found as a boy living feral in the woods, with no memory of his past. After the police concluded an exhaustive hunt for the child's family, which was never found, he was turned over to the foster system. Now, thirty years later, Wilde still doesn't know where he comes from, and he's back living in the woods on the outskirts of town, content to be an outcast, comfortable only outdoors, preferably alone, and with few deep connections to other people.When a local girl goes missing, famous TV lawyer Hester Crimstein--with whom Wilde shares a tragic connection--asks him to use his unique skills to help find her. Meanwhile, a group of ex-military security experts arrive in town, and when another teen disappears, the case's impact expands far beyond the borders of the peaceful suburb. Wilde must return to the community where he has never fit in, and where the powerful are protected even when they harbor secrets that could destroy the lives of millions . . . secrets that Wilde must uncover before it's too late.
*******************
This Friday Focus: The Friday 56 & Book Beginnings post was originally composed and/or compiled and published by Catherine for the blog, bookclublibrarian.com.  It cannot be republished without attribution.
Posted by Catherine @ Book Club Librarian at 9:00 PM