Today I'm featuring An Ambush of Widows by Jeff Abbott. The excerpts shared are from a hardcover version of the book borrowed from the library. 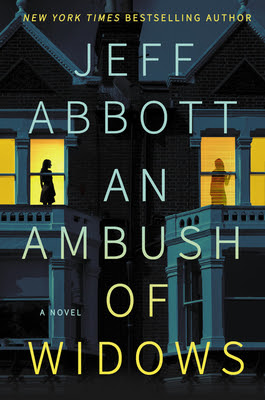 Kirsten North was doing what she normally did when Henry was gone on a business trip: finishing her own work on her laptop on the couch, ordering in Chinese food from that place Henry didn't much like, and watching a British baking show that was like a televised tranquilizer.

My thoughts:  I am intrigued by the mysterious plot description, which has me curious about the secrets that lead to the fate of the husbands and the aftermath facing their wives. The novel sounds like a real page turner.

From GoodReads:  In New York Times bestselling author Jeff Abbott’s latest novel of riveting psychological suspense, an uneasy alliance forms as two widows delve into their husbands’ deadly and dangerous secrets—as they try to protect their own.
Henry North is a down-on-his-luck cybersecurity expert from New Orleans. Adam Zhang is the cofounder of one of Austin’s most successful venture capitalist firms. These two men didn’t know each other. They had never met. Yet they died together, violently, in a place neither had any business being.When Henry doesn’t return from a business trip, his wife, Kirsten, panics—and then gets an anonymous phone call: “Your husband is dead in Austin.”Flora Zhang knew her husband was keeping secrets. She suspected an affair, but she had decided she could forgive him for his weakness—until her husband ended up dead. And with no explanation for her husband’s murder, the police begin to suspect her.Together, these two widows will face a powerful foe determined to write a false narrative about the murders. In doing so, neither Flora nor Kirsten will remain the women the world thought they were.