Today I'm participating in the Death by Leprechaun Great Escapes Blog Tour. In this post you'll find information about the book and the author along with my review.

There's also a giveaway contest--be sure to enter for a chance to win Kindle copies of Books 1-3 in the series. The entry link appears further on in this post. 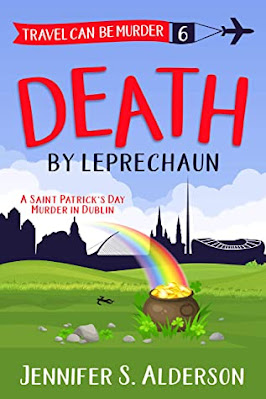 Death by Leprechaun: A Saint Patrick's Day Murder in Dublin

Synopsis . . . When an old friend is arrested in Dublin, tour guide Lana Hansen will need the luck of the Irish to clear him of the crime.

Lana is thrilled her friend Jeremy and his wife are on her tour to Ireland. The couple are having the time of their lives exploring the country’s rich literary and cultural history, until they run into Guy Smith, a reporter Jeremy recently exposed as a fraud.

A tussle turns into a fight and leaves each man vowing to destroy the other. Yet cross words and dirty looks tell Lana that Jeremy is not the only client on her tour who has a grudge against the reporter.

When Guy is murdered at the same pub Lana’s group is present at, Jeremy is the police’s number one suspect. But did he really murder the reporter? Or was it one of her other guests?

Lana keeps their tour going and her ears open for any clues that might help free her friend. Can she discover the true killer’s identity before their trip to the Emerald Isle draws to a close?

The Travel Can Be Murder Cozy Mysteries are heartwarming stories about making friends, traveling, and celebrating new experiences. Join tour guide Lana Hansen as she leads tourists and readers to fascinating cities around the globe on intriguing adventures that often turn deadly.
Books in the Travel Can Be Murder Cozy Mystery series:
Book 1 -  Death on the Danube: A New Year’s Murder in Budapest
Book 2 – Death by Baguette: A Valentine’s Day Murder in Paris
Book 3 – Death by Windmill: A Mother’s Day Murder in Amsterdam
Book 4 – Death by Bagpipes: A Summer Murder in Edinburgh
Book 5 – Death by Fountain: A Christmas Murder in Rome
Book 6 – Death by Leprechaun: A Saint Patrick’s Day Murder in Dublin
Book 7 – Death by Flamenco: An Easter Murder in Seville
Books 8-12 – Coming Soon!!
My review . . . Lana Hansen's latest travel assignment takes her and a group of tourists from the Emerald City of Seattle to the Emerald Isle of Ireland. She is excited to share the opportunity to celebrate St. Patrick's Day in Dublin's pubs, explore local landmarks, and visit the picturesque Irish countryside with her fellow travelers. Among the guests on this tour is Jeremy Tartal, Lana's friend and former colleague from her days as a journalist.
The tour appears to be off to a good start given its lively mix of solo and married travelers, and Lana does her best to engage each tourist, smoothing the way for a harmonious experience for all. Despite her best efforts, the tour takes an unpleasant turn after Lana's friend Jeremy has an ugly public encounter with Guy Smith, a disgraced Seattle journalist who is now working for the Dublin Chronicle. When Guy's lifeless body is later found by Jeremy in the alleyway of the pub Lana's tour group is visiting, police arrest Jeremy for the crime. After all, the two have a history, and Guy held Jeremy personably responsible for exposing his unscrupulous reporting. Contrary to appearances, Lana knows the police have the wrong man--but if Jeremy is innocent, then who killed Guy?
Eager to clear Jeremy's name and set the tour back on track, Lana finds herself in investigative mode. She discovers that Guy was a truly obnoxious man whose newspaper articles ruined numerous solid reputations, leaving a long list of enemies in his wake. In fact, Guy's actions adversely affected the fates of several people in the tour group. Could one of them have evened the score by murder? Or is one of Guy's new coworkers the culprit?
Death by Leprechaun is an entertaining addition to the Travel Can Be Murder mystery series. As in the previous novels -- all of which can be read as stand-alones -- Jennifer S. Alderson creates a lively fictional cast of characters and an engaging plot set in a real-world vacation destination. The series showcases the author's talent as a cozy mystery writer and her love of travel. With Alderson as travel guide, readers experience an itinerary that is so richly accurate in detail that they can imagine themselves there. In these days of restricted travel, this series provides a welcome escape to faraway places. For all of these reasons, this is one of my most favorite cozy series, and I eagerly await the next story and destination.
About the author . . . Jennifer S. Alderson was born in San Francisco, raised in Seattle, and currently lives in Amsterdam. After traveling extensively around Asia, Oceania, and Central America, she moved to Darwin, Australia, before finally settling in the Netherlands. Jennifer's love of travel, art, and culture inspires her award-winning Zelda Richardson Mystery series, her Travel Can Be Murder Cozy Mysteries, and her standalone stories. 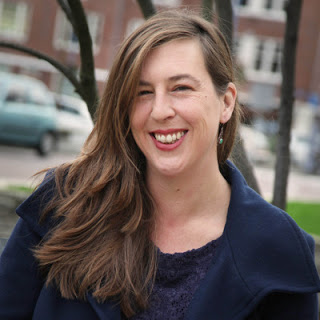 When not writing, she can be found in a museum, biking around Amsterdam, or enjoying a coffee along the canal while planning her next research trip.
Author links . . .
Website/Blog: http://www.jennifersalderson.com
Facebook: http://www.facebook.com/jenniferSAldersonauthor
Twitter: http://www.twitter.com/JSAauthor
Goodreads: https://www.goodreads.com/JennifeSAlderson
BookBub: https://www.bookbub.com/authors/jennifer-s-alderson
Amazon Author Page: https://www.amazon.com/Jennifer-S.-Alderson/e/B019H079RA/
Purchase link . . .  AMAZON
Giveaway . . . Travel Can Be Murder Cozy Mystery Books 1-3 contest . . .
Travel, anyone? Here is your passport to murder – three clean cozy mysteries set in Budapest, Paris, and Amsterdam!
Join tour guide Lana Hansen as she leads tourists and readers to fascinating cities around the globe on intriguing adventures that often turn deadly. The Book 1-3 Collection includes Death on the Danube: A New Year’s Murder in Budapest, Death by Baguette: A Valentine’s Day Murder in Paris, and Death by Windmill: A Mother’s Day Murder in Amsterdam.
Enter the giveaway for a chance to win Kindle copies of Books 1-3 in the series by clicking this link.