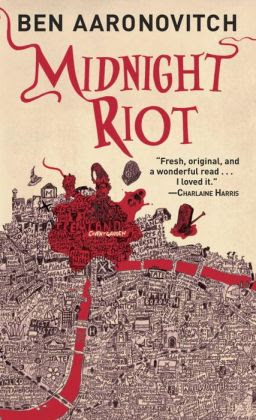 Beginning:  Chapter 1 Material Witness
It started at one thirty on a cold Tuesday morning in January when Martin Turner, street performer and, in his own words, apprentice gigolo, tripped over a body in front of the West Portico of St. Paul's at Covent Garden.
There are quite a few curiosities in this first sentence:  Who is Martin Turner?  How does one sign on to become an apprentice gigolo?  Does Martin Turner think of this as a career advancement?  Whose body is in front of St. Paul's?
--------------------
Page 56:  "I took a pull from my pint and waited.  Nightingale smiled again and sipped his own drink.  'Once you cross this particular Rubicon there will be no going back,' he said."
--------------------
From barnesandnoble.com:  Probationary Constable Peter Grant dreams of being a detective in London’s Metropolitan Police. Too bad his superior plans to assign him to the Case Progression Unit, where the biggest threat he’ll face is a paper cut. But Peter’s prospects change in the aftermath of a puzzling murder, when he gains exclusive information from an eyewitness who happens to be a ghost. Peter’s ability to speak with the lingering dead brings him to the attention of Detective Chief Inspector Thomas Nightingale, who investigates crimes involving magic and other manifestations of the uncanny. Now, as a wave of brutal and bizarre murders engulfs the city, Peter is plunged into a world where gods and goddesses mingle with mortals and a long-dead evil is making a comeback on a rising tide of magic.
Enjoy life with books . . .
Catherine
---------------------
Google Friend Connect is a thing of the past.  If you are a new follower or previous GFC follower, please sign up to follow the Book Club Librarian Blog via Bloglovin' or by email.  Let me know if you're a new follower and leave me a link to your blog so that I can follow you back.  Thanks!
---------------------
Follow me on Twitter: @bookclubreader
Friday Focus: The Friday 56 & Book Beginnings #23 was originally published by Catherine for bookclublibrarian.com. This post cannot be republished without attribution.
Posted by Catherine @ Book Club Librarian at 12:00 AM