Today I'm featuring a current read, To Die But Once by Jacqueline Winspear.  The excerpt shared is from a hardcover version borrowed from the library. 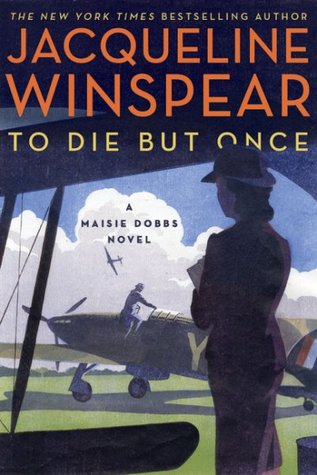 The boy had not had a day without a headache in weeks.  How many weeks was it now?  And how many aspirin powders had he taken, every night when he arrived back at his digs--a shared room in another lodging house in another town?  Another town with airfields close by, and buildings to be painted with that viscous gray emulsion.  He wondered about the aspirin and the emulsion as he walked home from the pub, and deep down inside himself, he knew that one had something to do with the other, though his mates on the job hadn't complained.  Not that he'd dare say anything--no, he had to keep his mouth shut, because he was lucky to have a job at all, so there was nothing to whine about.  And if truth be told, he should not have been at the pub drinking--but the landlord didn't mind, probably didn't even know.  After all, the boy had come in with the older lads, and it's not as if he looked like an apprentice.

What do you think?  Would you continue reading?
This is the fourteenth book in the Maisie Dobbs historical mystery series.  The first part of the series is set in World War I England, and the last few books have progressed in time to World War II.  Maisie herself is an interesting character who comes from humble beginnings, and rises to the title of Lady, with substantial means.  But Maisie has never forgotten where she came from and downplays her influential standing.  She is still a champion of the commoner, whose sole motivation is justice for those who have been wronged.

In each book, Winspear weaves a story with authentic detail that immerses the reader in the time period and the lives of the cast of beloved returning characters.  This is one of my favorite historical series, and I eagerly await and savor each new installment.

This First Chapter ~ First Paragraph post was originally composed and/or compiled and published by Catherine for bookclublibrarian.com.  It cannot be republished without attribution.  Retweeting and sharing of this original post on Google+ are appreciated.
Posted by Catherine @ Book Club Librarian at 12:00 AM