It's Friday . . . time to share book excerpts with:
Today I'm featuring an upcoming read,  Dear Mrs. Bird by AJ Pearce.  The excerpts shared are from the hardcover version I borrowed from the library. 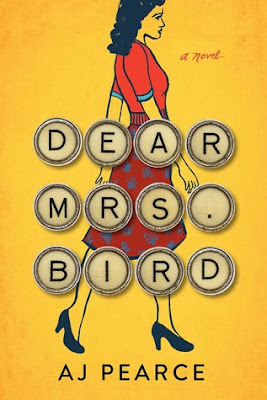 Beginning:  London
December 1940
Chapter 1
AN ADVERTISEMENT
IN THE NEWSPAPER

When I first saw the advertisement in the newspaper I thought I might actually burst.  I'd had rather a cheerful day so far despite the Luftwaffe annoying everyone by making us all late for work, and then I'd managed to get hold of an onion, which was very good news for a stew.  But when I saw the announcement, I could not have been more cock-a-hoop.

********************
Page 56: "Then I hurtled out of the office with my hat and coat in my hand before she could see I had gone crimson with guilt."
*******************
My thoughts:  My favorite historical fiction is set in the UK during World War II.  The opening paragraph rings true for me, because it sounds very similar to stories I've heard from family members who lived just outside of London during the war.  These people are no longer alive, so I'm feeling very nostalgic after reading a passage that makes me think of them.

*******************
From Goodreads:  A charming, irresistible debut novel set in London during World War II about an adventurous young woman who becomes a secret advice columnist—a warm, funny, and enormously moving story for fans of The Guernsey Literary and Potato Peel Pie Society and Lilac Girls.
London 1940, bombs are falling. Emmy Lake is Doing Her Bit for the war effort, volunteering as a telephone operator with the Auxiliary Fire Services. When Emmy sees an advertisement for a job at the London Evening Chronicle, her dreams of becoming a Lady War Correspondent seem suddenly achievable. But the job turns out to be typist to the fierce and renowned advice columnist, Henrietta Bird. Emmy is disappointed, but gamely bucks up and buckles down.Mrs Bird is very clear: Any letters containing Unpleasantness—must go straight in the bin. But when Emmy reads poignant letters from women who are lonely, may have Gone Too Far with the wrong men and found themselves in trouble, or who can’t bear to let their children be evacuated, she is unable to resist responding. As the German planes make their nightly raids, and London picks up the smoldering pieces each morning, Emmy secretly begins to write letters back to the women of all ages who have spilled out their troubles.Prepare to fall head over heels with Emmy and her best friend, Bunty, who are spirited and gutsy, even in the face of events that bring a terrible blow. As the bombs continue to fall, the irrepressible Emmy keeps writing, and readers are transformed by AJ Pearce’s hilarious, heartwarming, and enormously moving tale of friendship, the kindness of strangers, and ordinary people in extraordinary times.