It's Friday . . . time to share book excerpts with:
Today I'm featuring an upcoming read,  The Lido by Libby Page.  The excerpts shared are from the hardcover version I borrowed from the library. 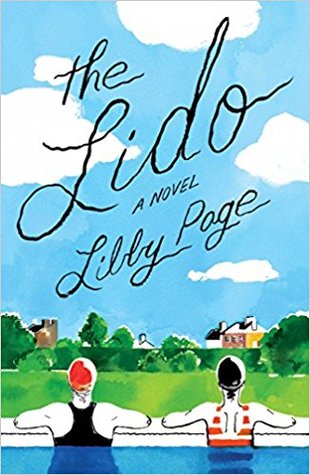 Beginning:  Chapter 1
Step out of Brixton underground station and it is a carnival of steel drums, the white noise of traffic, and that man on the corner shouting, "God loves you," even to the unlovable.

My thoughts:  I am really looking forward to beginning this debut novel that is getting quite a bit of buzz.  I love the descriptive opening sentence, which perfectly captures the street scene at a busy train station anywhere in the world.

Rosemary Peterson has lived in Brixton, London, all her life but everything is changing.

The library where she used to work has closed. The family grocery store has become a trendy bar. And now the Lido, an outdoor pool where she's swam daily since its opening, is threatened with closure by a local housing developer. It was at the Lido that Rosemary escaped the devastation of World War II; where she fell in love with her husband, George; where she found community during her marriage and since George’s death.

Twenty-something Kate Matthews has moved to Brixton and feels desperately alone. A once promising writer, she now covers forgettable stories for her local paper. That is, until she’s assigned to write about the Lido’s closing. Soon Kate’s portrait of the pool focuses on a singular woman: Rosemary. And as Rosemary slowly opens up to Kate, both women are nourished and transformed in ways they never thought possible.

In the tradition of Fredrik Backman, The Lido is a charming, feel-good novel that captures the heart and spirit of a community across generations—an irresistible tale of love, loss, aging, and friendship.


This Friday Focus: The Friday 56 & Book Beginnings on Fridays post was originally composed and/or compiled and published by Catherine for the blog, bookclublibrarian.com.  It cannot be republished without attribution. Sharing this original post on Twitter, Google+ and/or other blogs with appropriate recognition is appreciated.
Posted by Catherine @ Book Club Librarian at 9:30 PM