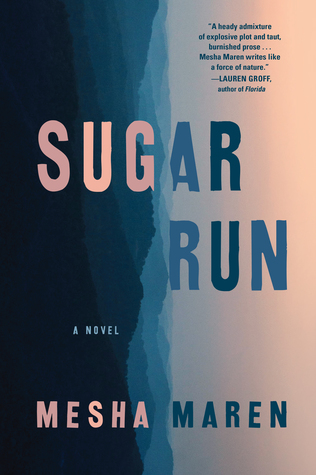 From Goodreads:  On the far side the view was nothing but ridgelines, the craggy silhouettes rising up against the night sky like the body of some dormant god. Jodi felt her breath go tight in her chest. This road went only one way, it seemed, in under the mountains until you were circled.

In 1989, Jodi McCarty is seventeen years old when she’s sentenced to life in prison for manslaughter. She’s released eighteen years later and finds herself at a Greyhound bus stop, reeling from the shock of unexpected freedom. Not yet able to return to her lost home in the Appalachian mountains, she goes searching for someone she left behind, but on the way, she meets and falls in love with Miranda, a troubled young mother. Together, they try to make a fresh start, but is that even possible in a town that refuses to change? Set within the charged insularity of rural West Virginia, Sugar Run is a searing and gritty debut about making a run for another life.
My thoughts:  I am drawn to stories about people trying to start over or who have the odds stacked against them, which is why this novel caught my attention.
This Can't Wait Wednesday post was originally composed and/or compiled and published by Catherine for the blog, bookclublibrarian.com.  It cannot be republished without attribution. Sharing this original post on Twitter, Google+ and/or other blogs with appropriate recognition is appreciated.
Posted by Catherine @ Book Club Librarian at 12:00 AM