It's Friday . . . time to share book excerpts with:
Today I'm featuring an upcoming read,  I Know You Know by Gilly Macmillan.  The excerpts shared are from a trade paperback version borrowed from the library. 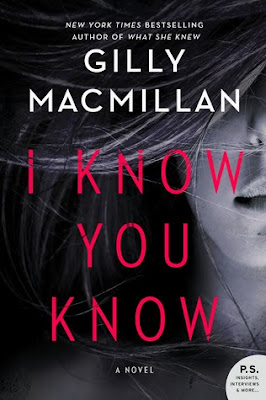 Page 56:   He didn't see it coming.  He remembers acutely the humiliation of loading bags into the boot of the car while she explained across the laden shopping trolley that their marriage was over.

********************
My thoughts:   This author is known for her taut thrillers.  I'm curious to find out how Macmillan connects the excerpts from the present with a story that also features past misdeeds.
********************
From Goodreads:  Twenty years ago, eleven-year-olds Charlie Page and Scott Ashby were murdered in the city of Bristol, their bodies dumped near a dog racing track. A man was convicted of the brutal crime, but decades later, questions still linger.

For his whole life, filmmaker Cody Swift has been haunted by the deaths of his childhood best friends. The loose ends of the police investigation consume him so much that he decides to return to Bristol in search of answers. Hoping to uncover new evidence, and to encourage those who may be keeping long-buried secrets to speak up, Cody starts a podcast to record his findings. But there are many people who don’t want the case—along with old wounds—reopened so many years after the tragedy, especially Charlie’s mother, Jess, who decides to take matters into her own hands.

When a long-dead body is found in the same location the boys were left decades before, the disturbing discovery launches another murder investigation. Now Detective John Fletcher, the investigator on the original case, must reopen his dusty files and decide if the two murders are linked. With his career at risk, the clock is ticking and lives are in jeopardy…

This Friday Focus: The Friday 56 & Book Beginnings post was originally composed and/or compiled and published by Catherine for the blog, bookclublibrarian.com.  It cannot be republished without attribution. Sharing this original post on Twitter, Google+ and/or other blogs with appropriate recognition is appreciated.
Posted by Catherine @ Book Club Librarian at 9:00 PM