Today I'm featuring an upcoming read, Brain Storm by Elaine Viets. The excerpt shared is from a trade paperback version I borrowed from the library. 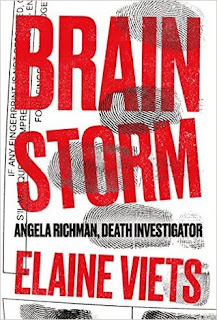 The doctor who nearly killed Angela Richman was buried today, and the Missouri medical establishment turned out to honor him.  The eulogies were heartfelt: doctors, nurses, and patients praised Dr. Porter Gravois's compassion and skill as a neurologist.  Their tears were genuine.  His funeral cortege was nearly a mile long on the road named after his powerful St. Louis family.  Everyone called him by his nickname, Chip, as if they were all part of his inner circle.  Chip made them feel that way.

What do you think?  Would you continue reading?
The first paragraph is intriguing.  It presents a portrait of a recently deceased doctor who was apparently well-regarded; yet, it also begs the question: what went wrong with his patient Angela Richman?  I definitely need to read more to find out.