Today I'm featuring my current read,I Know Who You Are by Alice Feeney.  The excerpts shared are from a hardcover version I borrowed from the library. 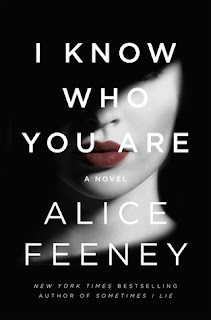 I'm that girl you think you know, but you can't remember where from.

My thoughts:  Alice Feeney's sophomore novel (her debut was Sometimes I Lie) is a gripping read about a troubled marriage.  When actress Aimee Sinclair's husband Ben goes missing, her life quickly unravels.  Told in chapters that alternate between her current situation and her childhood, Feeney keeps readers guessing as to whether Aimee is an unreliable narrator losing her grip on reality or a woman whose life is being cruelly destroyed by outside forces.  Filled with psychological twists aplenty, this story is a first-rate page-turner.

********************
From Goodreads:  l Know Who You Are is the brilliant tale of two stories. One is about Aimee Sinclair—well-known actress on the verge of being full-on famous. If you saw her, you’d think you knew her. One day towards the near-end of her shoot on her latest film, Aimee comes home from filming to find her husband’s cell phone and wallet on the dining room table. He never goes anywhere without them. But he’s nowhere to be found. She’s not too concerned—they had a huge fight the night before. They both said things they didn’t mean. He might have done things he didn’t mean, things she can’t forget. Even though she has a history of supposedly forgetting. After all, she’s a very good actress.

The next morning she goes for her morning run and then goes to her favorite coffee shop. But her card is denied. When she calls the bank they say her account has been emptied of $10,000. She immediately suspects her husband. But they say no, it was Aimee herself who closed out the account. And thus begins a bizarre rabbit hole into which Aimee finds herself falling where nothing is at it seems.

Alternating with Aimee’s story is that of a little girl who wandered away from home. We always tell our kids not to talk to strangers or bad things will happen. Well, bad things happen.

In I Know Who You Are, Alice Feeney proves that she is a master at brilliantly complicated plots and twists after twists.

Email ThisBlogThis!Share to TwitterShare to FacebookShare to Pinterest
Labels: Alice Feeney, Book Beginnings on Fridays, Friday Focus, I Know Who You Are, psychological thriller, The Friday 56