Today I'm featuring my current read, The Department of Sensitive Crimes by Alexander McCall Smith, the first book in his new Detective Varg series.  The excerpts shared are from a hardcover version borrowed from the library. 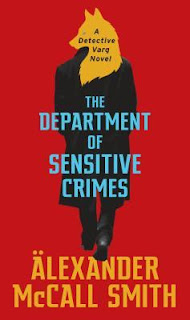 "Soren," said Dr. Svensson, gravely, but with a smile behind his horn-rimmed glasses; and then waited for the response.  There would be an answer to this one-word sentence, but he would have to wait to see what it was.


My thoughts:  Alexander McCall Smith is an accomplished author of popular fiction with many series and stand-alone novels.  I am a reader of his 44 Scotland Street and Isabel Dalhousie series, and am excited to begin another of his series with this book. His trademark humor, quirky characters, and amusing scenarios are making this a lighthearted and delightful read.
********************
From Goodreads:  In the Swedish criminal justice system, certain cases are considered especially strange and difficult, in Malmo, the dedicated detectives who investigate these crimes are members of an elite squad known as the Sensitive Crimes Division.
These are their stories.

The first case: the small matter of a man stabbed in the back of the knee. Who would perpetrate such a crime and why? Next: a young woman's imaginary boyfriend goes missing. But how on earth do you search for someone who doesn't exist? And in the final investigation: eerie secrets that are revealed under a full moon may not seem so supernatural in the light of day. No case is too unusual, too complicated, or too, well, insignificant for this squad to solve.
The team: Ulf 'the Wolf" Varg, the top dog, thoughtful and diligent; Anna Bengsdotter, who's in love with Varg's car (and possibly Varg too); Carl Holgersson, who likes nothing more than filling out paperwork; and Erik Nykvist, who is deeply committed to fly fishing.
With the help of a rather verbose local police officer, this crack team gets to the bottom of cases other detectives can't or won't bother to handle. Equal parts hilarious and heartening, The Department of Sensitive Crimes is a tour de farce from a true master.