Today I'm featuring a book I finished earlier this week, The Stranger Inside by Laura Benedict.  The excerpts shared are from an eBook borrowed from the library. 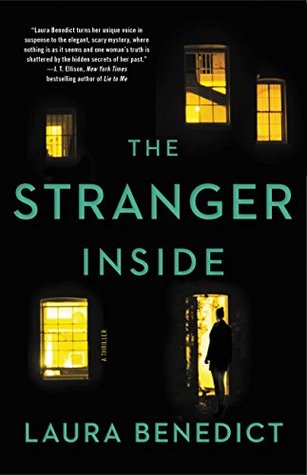 Beginning: Chapter One
The outcropping of limestone on which Michelle Hannon struck her head had been a part of the hillside for three thousand years, before there were trees in sight taller than a scrubby pine.

My thoughts:  Kimber Hannon returns from a short camping retreat to find that her keys no longer open the doors to her home. Someone is living there without her consent, with unauthorized access to all of her belongings. Thus begins Kimber's living nightmare, and her troubles multiply as she attempts to uncover the identity of the squatter. Her inquiries lead Kimber down dark roads that test her relationships and threaten to expose the secrets of her past.

As Kimber confronts disturbing events from her childhood, she realizes that she doesn't know the full story of what actually occurred. Will these new revelations completely tear her apart, or will she find a way to come to terms with the truth and finally put the past behind her? This suspenseful novel with its unsettling premise is full of twists and turns that will keep readers off balance until its very end.
********************
From Goodreads:  What if you came home to find a stranger living inside your house?  An "outstanding, ever-twisting, surprise-filled" psychological drama (Publishers Weekly), in the tradition of Shari Lapena and Liane Moriarty, from Edgar- and Thriller Award-nominated author Laura Benedict.
There's a stranger living in Kimber Hannon's house. He tells the police that he has every right to be there, and he has the paperwork to prove it. But Kimber definitely didn't invite this man to move in. He tells her that he knows something about her, and he wants everyone else to know it too.

These words reveal a connection to Kimber's distant past, and dark secrets she'd long ago left buried. This trespasser isn't after anything as simple as her money or her charming Craftsman bungalow. He wants to move into her carefully orchestrated life--and destroy it.