Today I'm featuring an upcoming read, This is What Happened by Mick Herron.  The excerpt shared is from a hardcover version I received from the publisher. 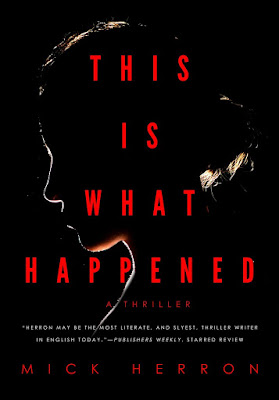 The longer she sat there, the colder she became.  With her back to the cistern, and her feet drawn up beneath her, Maggie perched on the closed lid of the toilet, and concentrated on being as still as possible.  An hour earlier, a spasm in her leg had caused the overhead lights to switch on. Their electric hum had startled her more than the glare.  Someone would hear it, she thought, and come investigate. But nobody arrived, and the spasm subsided, and a few minutes later the lights turned themselves off again.

"How long do I have to hide in the toilets?" she had asked Harvey.


What do you think?  Would you continue reading?
As if the title wasn't enough to do so, the opening lines certainly piqued my curiosity. Who is Maggie?  Why is she hiding in the toilets?  I'll have to read on to find out.

This First Chapter ~ First Paragraph post was originally composed and/or compiled and published by Catherine for the blog, bookclublibrarian.com.  It cannot be republished without attribution. Sharing this original post on Twitter with appropriate recognition is appreciated.
Posted by Catherine @ Book Club Librarian at 12:00 AM