Today I'm featuring a current read, Eleanor in the Village by Jan Jarboe Russell. The except shared is from a hardcover version borrowed from the library. 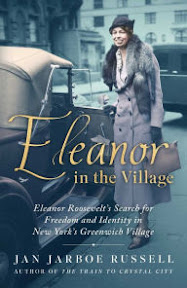 "I think at a child's birth, if a mother could ask

a fairy godmother to endow it with the most useful gift,

that gift should be curiosity."

Eleanor was born into an old and large clan of Dutch merchants who had arrived in the seventeenth century and settled in the colony of New Amsterdam at the southern tip of Manhattan. The first of the Roosevelts in New York were Claes Martenzen van Roosevelt and his wife, Jannetje, who arrived by ship from Holland sometime before 1648. Eight generations of Eleanor and Franklin Roosevelt's ancestors built fortunes as importers of West Indian sugar, as bankers, and as speculators in Manhattan real estate. All of the Roosevelts who came along after the seventeenth century were born on Manhattan Island, but in time the clan split into the two groups: the Oyster Bay Roosevelts on Long Island, who were associated with Eleanor's father, Elliott, and with her uncle Theodore, and who belonged to the Republican Party; and the Hyde Park Roosevelts, who, by contrast, were linked to James Roosevelt Sr. and Sara Delano Roosevelt, parents of Franklin and supporters of the Democratic Party.

The opening paragraph is very informative, providing some background on a woman I have long admired. I am enjoying learning more about her and her long association with New York City.