Today I'm featuring an upcoming read, A Glimmer of Death by Valerie Wilson Wesley. It's the first book in the Odessa Jones Mystery Series. The excerpts shared are from a trade paperback version borrowed from the library. 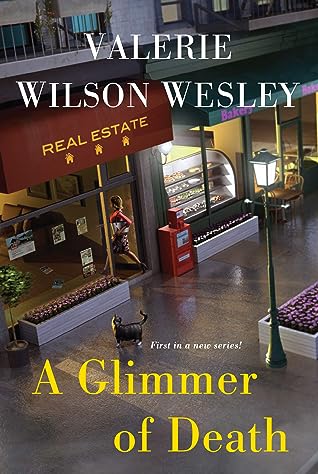 Beginning:  The office reeked of nutmeg. It tickled my nose, filled my mouth, forcing its way down my throat. Funny thing about nutmeg. A dash can spice up cocoa; too much can make you sick. Determined to ignore it, I focused on the real estate listings in front of me. Yet the smell would't leave. I closed my eyes, trying to block this pain-in-the-neck, useless sixth sense, but it did no good. To me, Odessa Jones, nutmeg means death.

Page 56:  "Mrs. Odessa Jones." A pat on my shoulder and a gruff voice brought me into the present. A stern pair of eyes loomed above me, waiting for a response. "Would you come with me, please?"

My thoughts:  Unlike the lead character, nutmeg doesn't make me think of death; rather, it's a scent I associate with holiday baking. So why does Odessa Jones feel this way? I'm curious to find out, and looking forward to starting a new series set in my neighboring state of New Jersey.

In the first of a thrilling new series, one woman's extraordinary psychic gift plunges her already-troubled present into chaos--and puts her future in someone's deadly sights...

Until now, Odessa Joness's inherited ability to read emotions and foretell danger has protected her. But second sight didn't warn her she would soon be a widow--and about to lose her home and the catering business she's worked so hard to build. The only things keeping Dessa going are her love for baking and her sometimes-mellow cat, Juniper. Unfortunately, putting her life back together means taking a gig at an all-kinds-of-shady real estate firm run by volatile owner Charlie Risko...

Until Charlie is brutally killed--and Dessa's bullied co-worker is arrested for murder. Dessa can't be sure who's guilty. But it doesn't take a psychic to discover that everyone from Charlie's much-abused staff to his long-suffering younger wife had multiple reasons to want him dead. And as Dessa follows a trail of lies through blackmail, dead-end clues, and corruption, she needs to see the truth fast--or a killer will bury her deep down with it.