Today I'm featuring an upcoming read, The House Uptown by Melissa Ginsburg. The excerpts shared are from a hardcover version borrowed from the library. 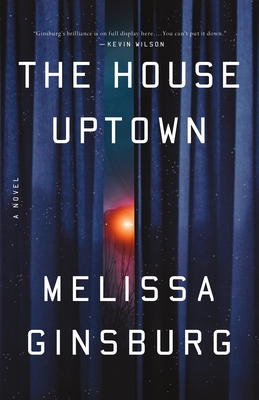 Lane came awake to the sound of unoiled hinges, her heart pumping hard. She had been dreaming of a massive cloud, a storm that blew all the doors open, dread billowing around her.

Page 56:  Back then, when both her parents were alive, she used to think bad things came in from the outside, poaching from the edges of the field. Now she understood that even the house, the barns and sheds, the prairie fire crabapples and the oozing maples were made of death.

From GoodReads:  For fans of Megan Abbott and Laura Lippman, Melissa Ginsburg's The House Uptown is an emotional coming-of-age novel about a young girl who goes to live with her eccentric grandmother in New Orleans after the death of her mother.Ava, 14 years old and totally on her own, has still not fully processed her mother's death when she finds herself on a train heading to New Orleans, going to stay with Lane, her grandmother whom she's never met.Lane is a well-known artist in the New Orleans art scene. She spends most of her days in a pot-smoke haze, sipping iced coffee, and working on the mural that has been her singular focus for years. Her grip on reality is shaky at best, but her work provides a comfort.Ava's arrival unsettles Lane. The girl bears an uncanny resemblance to her daughter, whom she was estranged from before her death. Now her presence is dredging up painful and disturbing memories, which forces Lane to retreat even further into her own mind. Ava, meanwhile, is entranced and frightened by her grandmother. She wants to be included in her eccentric life, but can't quite navigate Lane's tempestuous moods.Attempting to keep the peace is Oliver, Lane's assistant and confidant. As this unlikely trio attempts to find their way and form a bond, the oppressive heat and history of New Orleans bears down on them, forcing them to a reckoning none of them is ready for.