Today I'm participating in the Much Ado About Nauticaling Great Escapes Blog Tour. In this post you'll find information about the book and the author along with my review. There's also a giveaway contest--be sure to enter for a chance to win a print copy of the book (U.S. residents only) by typing your name, email address, and interest in the contest in the Contact Me section in the right hand column of this web page. Entries must be submitted by midnight Eastern Time on August 10, and the winner will be notified on or about August 12, 2021. 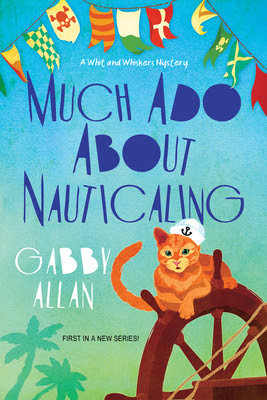 Synopsis . . . Whitney Dagner is your tour guide to a Pacific paradise that's to die for—only to find it's a place people are also willing to kill for—in Gabby Allan's Much Ado About Nauticaling, first in the "Whit and Whiskers Mystery" series.
After far too many years in the Los Angeles corporate world, Whitney Dagner has come home to Santa Catalina Island off the California coast to help her brother Nick run Nautically Yours, the family tourism business. Between gift shop shifts selling all manner of T-shirts and tchotchkes and keeping her feline Whiskers in fine fettle, she pilots the Sea Bounder, a glass bottom boat showing tourists the underwater sights of aquatic plants, marine life—and a murder victim?The self-proclaimed Master of the Island, Jules Tisdale was a wealthy man with business interests throughout Catalina who was about to be honored as Person of the Year before someone strangled him with his own tie and tossed his body into the water. That someone appears to be Nick, who had a raw deal from Jules and no alibi the night of his murder. To clear her brother's name, Whit will have to investigate Jules's shady associates and not exactly grief-stricken family members—with the unwelcome help of Felix Ramirez, police diver and Whit's ex-boyfriend who's looking to rekindle their relationship.
My review . . .  Whitney Dagner has left behind a dull corporate desk job in mainland California for a more laidback existence running a gift shop and giving tours on her family's glass bottom boat in Santa Catalina Island. It's anything but smooth sailing, however, when Whit finds herself adding sleuthing to her job description after her brother becomes the prime suspect in the murder of a local businessman.
Jules Tisdale, the self-styled business guru and island bigwig who has just been named Person of the Year by the local Chamber of Commerce, celebrates his accomplishments with a group tour on The Sea Bounder, the Dagners' glass bottom boat. Mere hours after disembarking, Whitney and her brother Nick find Tisdale's lifeless body floating beneath their boat. Is this a tragic accident, or is foul play involved? Nick's evasiveness and lack of alibi make him the lead--and only--suspect when Jules's death is ruled a homicide.
Who killed Jules? Whitney knows her brother isn't responsible, despite a recent altercation between the victim and suspect over a contentious business deal. Whit learns through the gossip mill that other island business owners have tangled relationships with Jules, and she is determined to convince the police to expand their investigation and suspect list, especially after a second victim is discovered. As Whitney delves deeper, she finds herself in the killer's crosshairs. Will the police find the guilty party before Whitney becomes the next victim?
Much Ado About Nauticaling is a captivating caper with an amusing cast of characters whose ties to the murder victim ensure an engaging read, as does the picturesque island setting, where locals zip around on golf carts. Author Gabby Allan has created a nice sense of community centering around Whitney, her best friend Maribel, her brother Nick, and their grandparents Goldy and Pops. And the return of Whitney's old flame Felix adds another layer of storyline to unfold as the series continues. The Whit and Whiskers mystery series is off to a very good start indeed.
About the author . . . After writing plays for her friends to act out as a kid, bad poetry in high school, and her high school Alma Mater song, GABBY ALLAN finally found her true passion—cozy mysteries. Being able to share her world with readers, one laugh at a time, and touch people’s hearts with her down-to-earth characters makes for the best job ever. 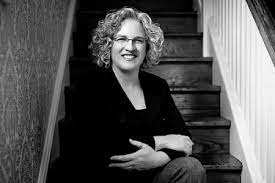 This California girl now lives with her husband, daughter, and two insane dogs in Central Pennsylvania where she is hard at work on her next novel.
Author links . . .

Facebook: https://www.facebook.com/GabbyAllanAuthor
Purchase Links . . . Amazon – B&N – Kobo – Google Play – IndieBound
Giveaway . . . Enter the giveaway contest for a chance to win a print copy of the book (U.S. residents only) by typing your name, email address, and interest in the contest in the Contact Me section in the right hand column of this web page. Entries must be submitted by midnight Eastern Time on August 10, and the winner will be notified on or about August 12, 2021.