Today I'm featuring my current read, Murder in the Park, the first book in the Oak Park Village mystery series by Jeanne M. Dams. The book first came to my attention at this year's Malice Domestic Conference in Bethesda, Maryland. The excerpts shared are from a hardcover edition borrowed from the library. 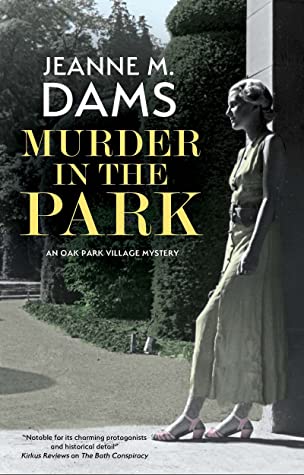 It was Ginger who started it.

My thoughts:  Wealthy, privileged Elizabeth Fairchild must find a way out of the crippling grief that has kept her close to home and make a new life for herself. When a local antiques dealer is murdered, she feels compelled to find the killer and clear the name of the music teacher wrongly accused of the crime. But her efforts put Elizabeth in the cross hairs of the Chicago mob and hate groups intolerant of immigrants, other religions, and racial minorities. Fearless sometimes to the point of being foolhardy, Elizabeth navigates threats to her safety in search of a murderer as well as the vulnerability of opening herself up to new personal relationships.

A strong independent streak, sense of fairness, and pursuit of justice, make the protagonist of this series a breath of fresh air. As a modern woman, Elizabeth rejects the constraints of her mother's beliefs to embrace equality, taking a stand for what is right and advocating for those less fortunate. She is the type of character one roots for as she finds her footing, with anticipation of what is to come in subsequent installments.Grace Hemingway--Ernest's mother--plays an active role in the plot as a neighbor, and it will be interesting to see if Mrs. Hemingway continues in the story line going forward. Yet another reason to await book two in the series.

June, 1925. Having been widowed in the First World War, Elizabeth Fairchild lives a quiet life at the home of her wealthy parents in genteel Oak Park village, Illinois. Although she does her best to avoid emotional entanglements, determined never to be hurt again, Elizabeth forms a close friendship with gentle Mr Anthony, who owns the local antiques store.

But tragedy strikes when Mr Anthony is found stabbed to death in the alley behind his shop. Why would anyone murder a mild-mannered antiques dealer who simply loved beautiful things? A robbery gone wrong? A gangland execution? Or could it have something to do with the mysterious customer who bought a gold pocket watch from Mr Anthony on the day he died?

When one of her father's oldest friends is accused of the crime, Elizabeth determines to expose the real killer. But her investigations soon attract unwelcome attention. With gangsters moving into the neighbourhood from nearby Chicago, Oak Park is no longer the safe haven it once was. Could Elizabeth be seriously out of her depth?

This Friday Focus: The Friday 56 and Book Beginnings post was originally composed and/or compiled and published by Catherine for the blog, bookclublibrarian.com. It cannot be republished without attribution.