Today I'm featuring The Lost Girls of Willowbrook by Ellen Marie Wiseman. The excerpts shared are from a trade paperback edition borrowed from the library. 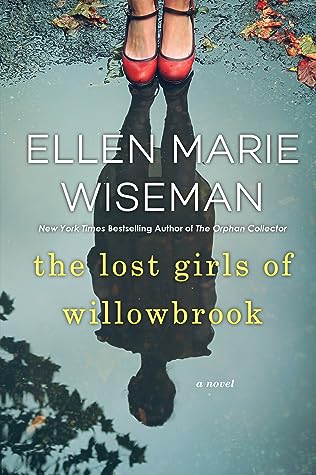 People still search the woods for the remains of lost children.

Page 56:  A searing pain tore at the top of Sage's feet, dragging along her flesh like hot knives and slowly bringing her out of her drug-induced stupor. After several tries, she opened her heavy eyelids, looked around, and tried to understand what was happening.

My thoughts:  The plot is quite realistic and the setting has an ominous sense of danger and mystery. Given its history, one can easily imagine sinister happenings at the former Willowbrook State School.

Closed after an expose by reporter Geraldo Rivera, the real-life Willowbrook State School was the site of neglect and abuse on a major scale. The property is now the home of The College of Staten Island, a senior college within the City University of New York system. Several of the old buildings still remain on the campus. They are unoccupied, but there are some who believe they are haunted by the ghosts of former inhabitants.

From GoodReads:  Fact, fiction, and urban legend blend in this haunting story about a young woman mistakenly imprisoned at Willowbrook State School, the real-life institution later shuttered for its horrendous abuses.

Sage Winters always knew her sister was a little different even though they were identical twins. They loved the same things and shared a deep understanding, but Rosemary—awake to every emotion, easily moved to joy or tears—seemed to need more protection from the world.

Six years after Rosemary’s death from pneumonia, Sage, now sixteen, still misses her deeply. Their mother perished in a car crash, and Sage’s stepfather, Alan, resents being burdened by a responsibility he never wanted. Yet despite living as near strangers in their Staten Island apartment, Sage is stunned to discover that Alan has kept a shocking secret: Rosemary didn’t die. She was committed to Willowbrook State School and has lingered there until just a few days ago, when she went missing.

Sage knows little about Willowbrook. It’s always been a place shrouded by rumor and mystery. A place local parents threaten to send misbehaving kids. With no idea what to expect, Sage secretly sets out for Willowbrook, determined to find Rosemary. What she learns, once she steps through its doors and is mistakenly believed to be her sister, will change her life in ways she never could imagined . . .