Today I am participating in the Partners in Crime blog tour of Clam Wake by Mary Daheim.

Synopsis . . . Innkeeper and irrepressible sleuth Judith McMonigle Flynn and cousin Renie face off against a cold-blooded killer in a beach community in this delightfully charming Bed-and-Breakfast mystery from USA Today and New York Times bestselling author Mary Daheim.
With the holidays gone and Hillside Manor almost empty, Innkeeper Judith McMonigle Flynn has a bad case of the blues. A housesitting stint at her aunt and uncle’s retirement home on Whoopee Island with cousin Renie seems like the ideal pick-me-up. Surrounded by retirees in the off-season sounds peaceful and pleasant--or so the duo thinks. But it isn’t long before a dead body pops up in their vicinity. Not surprising in an area full of older folks—until they learn it wasn’t a bad ticker that did in the victim, but a very sharp knife. With clouds of suspicion hovering over her and Renie, Judith reluctantly begins sleuthing—if only to prove they didn’t commit the crime.
But what she finds is puzzling. The victim reputedly didn’t have an enemy in the world--except for the killer. Digging for clams and answers, the cousins discover that retirement can be deadly—at least among the eclectic, eccentric residents of Obsession Shores.
My Review . . . Welcome to the community of Obsession Shores on Whoopee Island in the Pacific Northwest, where the majority of residents are seniors in search of their next cocktail.  It's off-season, and the gossip is as thick as the fog.  Enter cousins Judith and Renie, who are expecting an uneventful mini-vacation when they agree to house-sit for their aunt and uncle.  Before long their peace is shattered, when they discover the body of resident Ernie Glover on a deserted stretch of beach.  The community is baffled and frightened by his death from unnatural causes, because Ernie had no known enemies.
The cousins are no strangers to corpses and investigations, having had many victims cross their paths over their sixteen years of amateur detecting.  Yet they are reluctant to get involved in this investigation, given Judith's recent experience in a cold case where she identified the wrong guilty party, and after which she swore off further sleuthing.  Old habits die hard, and the women are quickly drawn into the thick of things.  And when they stumble upon unusual nighttime activities during a stakeout, they discover there are deeply hidden secrets and unknown ties within this community of eccentrics.  Are the secrets related to Ernie's demise?  Can they unravel the motive behind Ernie's death and expose the killer?
This latest installment in the Bed-and-Breakfast series can be read as a stand-alone mystery.  While the long-running series has a strong fan base, I found the plot of Clam Wake muddled with an inordinate number of red herrings and a short supply of clues to seriously ponder along the way.  This left little opportunity for speculation on the reader's part as to the motive and killer until the last few chapters, which I found somewhat frustrating.

Humor held center-stage throughout the story, with the mystery taking a backseat at points.  The inter-generational banter between the main characters and their close relatives--peppered with insults, puns, and acerbic wit--was funny, but became rather tedious and annoying over time, as it overshadowed the more caring and redeeming qualities of the characters.  Although this tongue-in-cheek style can be quite entertaining and effective, I suspect in this instance it is more enjoyable for those who have read several books in the series.
Despite its flaws, the story is a good escape from everyday reality, and its island setting is both inviting and the perfect setting for a murder mystery thanks to its remoteness and foggy weather.  Perhaps I would feel differently about the story overall had I been reading this series from its inception rather than jumping in at this late stage.  After all, its best-selling status indicates a considerable following among mystery lovers. I am tempted to pick up the first book in the series to see how it all began and how the characters have evolved over time.
Disclaimer . . . I was given a copy of Clam Wake by the publisher in exchange for an honest review.
About the Author . . . 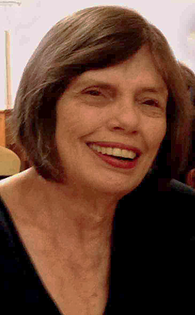 Seattle native Mary Richardson Daheim lives three miles from the house where she was raised. From her dining nook she can see the maple tree in front of her childhood home. Mary isn’t one for change when it comes to geography. Upon getting her journalism degree from the University of Washington (she can see the campus from the dining nook, too), she went to work for a newspaper in Anacortes WA. Then, after her marriage to David Daheim, his first college teaching post was in Port Angeles where she became a reporter for the local daily. Both tours of small-town duty gave her the background for the Alpine/Emma Lord series. Mary spent much of her non-fiction career in public relations (some would say PR is fiction, too). But ever since she learned how to read and write, Mary wanted to tell stories that could be put between book covers (e-readers were far into the future and if she hadn’t seen her daughter’s iPad, she might not know they exist). Thus, she began her publishing career with the first of seven historical romances before switching to mysteries in 1991. If Mary could do the math, she’d know how many books she’s published. Since she can’t, she estimates the total is at least 55. Or something. At the time of her husband and mentor’s death in February 2010, David and Mary had been married for over 43 years. They have three daughters, Barbara, Katherine and Magdalen, and two granddaughters, Maisy and Clara. They all live in Seattle, too. Those apples don’t move far from the tree…literally.

Posted by Catherine @ Book Club Librarian at 9:27 AM