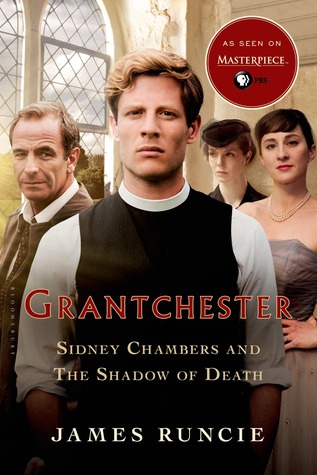 Have you watched the Grantchester series on PBS Masterpiece?  The television program was adapted from the books written by James Runcie.  Sidney Chambers and the Shadow of Death is the first book in the series.

Beginning:  The Shadow of Death
Canon Sidney Chambers had never intended to become a detective.  Indeed, it came about quite by chance, after a funeral, when a handsome woman of indeterminate age voiced her suspicion that the recent death of a Cambridge solicitor was not suicide, as had been widely reported, but murder.
*********************
Page 56: "He returned home, poured himself the smallest of Johnnie Walker's against the chill of the night, and looked at Stephen Staunton's suicide note once more.  Then, as the whisky took care of his anxieties, the beginnings of an idea started to emerge."
*********************

Friday Focus: The Friday 56 & Book Beginnings #70 was originally published by Catherine for bookclublibrarian.com. This post cannot be republished without attribution.
Posted by Catherine @ Book Club Librarian at 12:00 AM