Today I'm featuring Death on the Sapphire by R.J. Koreto, which I borrowed from the library.  It's the first book in a new historical mystery series set in London in the early 1900s. 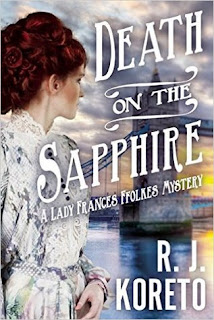 The surprising coda to the tragic death of Major Daniel "Danny" Colcombe, a restless war hero, capped what was already an especially busy day for Lady Frances Ffolkes. The morning had been taken up writing a speech on women's suffrage in her capacity as chair of the outreach committee of the League for Women's Political Equality.  Next was following up on arrangements for the Ladies' Christian Relief Guild soup kitchen in the East End.  She had also made an appointment for what would no doubt be a tedious meeting with Henry Wheaton, the family solicitor--ever since moving out of the family home and into Miss Plimsoll's Residence Hotel for Ladies, she had started taking care of her own finances.  A dull task, but rather liberating nonetheless for an independent woman.

What do you think?  Would you continue reading?
The first paragraph describes why I am so enamored of books set in Edwardian London--strong, independent ladies who fight for women's rights and social justice and are dedicated to improving society in the early years of the 20th century.


First Chapter ~ First Paragraph was originally published by Catherine for bookclublibrarian.com.  This post cannot be republished without attribution. Retweeting and sharing on Google+ are appreciated.
Posted by Catherine @ Book Club Librarian at 12:00 AM