It's Friday . . . time to share book excerpts with:
Today I'm featuring The Girl From The Savoy by Hazel Gaynor.  The excerpts shared are from the trade paperback I borrowed from the library. 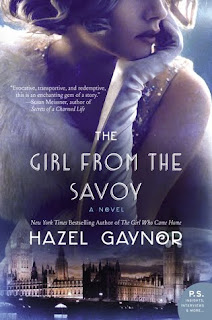 "That's the fascinating thing about life, Miss Lane.
All its wonderful unpredictability."

"It is as simple as this: a person can be unpunctual or untidy, but if they intend to get on in life they certainly cannot be both."  I'll never forget these words, nor the housekeeper who barked them at me as I skulked back to the house--late and disheveled--from my afternoon off.

My thoughts:   My favorite stories are those set in London in the first half of the 20th century.  This historical fiction blends aspects of class and societal mores, the glamor of London, and the consequences of war on the lives of Brits in 1920s London.
****************

From Goodreads:  Presenting a dazzling new historical novel … The Girl From The Savoy is as sparkling as champagne and as thrilling as the era itself.
Sometimes life gives you cotton stockings. Sometimes it gives you a Chanel gown …Dolly Lane is a dreamer; a downtrodden maid who longs to dance on the London stage, but her life has been fractured by the Great War. Memories of the soldier she loved, of secret shame and profound loss, by turns pull her back and spur her on to make a better life.When she finds employment as a chambermaid at London’s grandest hotel, The Savoy, Dolly takes a step closer to the glittering lives of the Bright Young Things who thrive on champagne, jazz and rebellion. Right now, she must exist on the fringes of power, wealth and glamor—she must remain invisible and unimportant.But her fortunes take an unexpected turn when she responds to a struggling songwriter’s advertisement for a ‘muse’ and finds herself thrust into London’s exhilarating theatre scene and into the lives of celebrated actress, Loretta May, and her brother, Perry. Loretta and Perry may have the life Dolly aspires to, but they too are searching for something.Now, at the precipice of the life she has and the one she longs for, the girl from The Savoy must make difficult choices: between two men; between two classes, between everything she knows and everything she dreams of. A brighter future is tantalizingly close—but can a girl like Dolly ever truly leave her past behind?

Friday Focus: The Friday 56 & Book Beginnings was originally published by Catherine for bookclublibrarian.com.  This post cannot be republished without attribution. Retweeting and sharing on Google+ are appreciated.